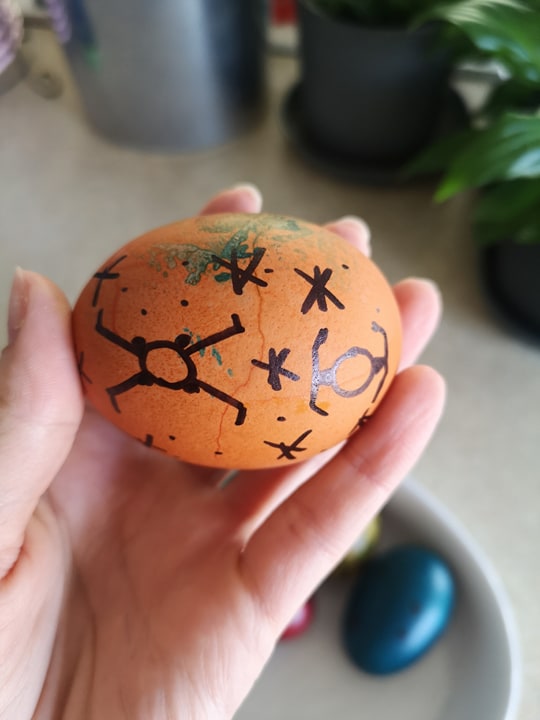 I’ve never been to a proper Easter egg hunt. This tradition always was very American to me, and well, my family is more about polish traditions. So, I never actually cared. But this term Easter egg hunt has another meaning, much closer to my heart. It’s looking for subtle, cleverly-hidden pop cultural (or just any clues dropped by the creators) references in movies, TV shows and video games! And since we are all on some sort of a lock down, we have plenty of time to pay more attention to what we watch. Trust me: there is plenty of stuff that we miss the first time. That’s why re-watching is exciting!

Be the rabbit! (Or bunny, in this case)

But what is up with this tradition during Easter? I am not an expert and lots of sources says different things. Originally, eating eggs was not allowed by church during the week leading up to Easter – Holy Week. So, any eggs laid that week were saved and decorated to make them Holy Week eggs, that were then given to children as gifts. Victorians adapted the tradition with satin-covered cardboard eggs filled with Easter gifts.

Now, about the rabbits – generally they give birth to a big litter of babies, so they became something of a „symbol of new life”. Story goes, that the Easter Bunny lays, decorates and hides eggs as they are also a symbol of new life – or fertility. According to the legend, only good children received colored eggs as gifts.

Fun fact: In Switzerland, Easter eggs are delivered by a cuckoo and in parts of Germany by a fox.

You’d be amazed how much research you can get done when you have no life whatsoever.

Have you lot read Ready Player One by Ernest Cline? It’s a great fantasy book! Like I mentioned few times before, I am re-discovering my love for sci-fi (still reading Dune, it’s quite a challenge!), and when I though about Easter egg hunt, this was the first book that came into my mind. I should note that I gave up on the movie, though now that I think about it, maybe I should give it a second chance? I remember, that it was few days after reading the book, so it was super fresh and I didn’t like the fact, that they missed out few critical things. But well, who knows? Anyway, yes – it’s a great novel about Easter egg hunt.

Let’s get to it then, what exactly is this whole thing? According to online dictionary, in popular culture, Easters eggs are text, images, visual gags, jokes, or other content that creators intentionally hide in media for their and their viewers’ amusement. Sounds fun! And all the geeks out there are really into this. I enjoy finding them on my own, without Internet’s help, but sometimes there are so many, that you just can’t resist. There is an old egg hunt rule: If you think that you got them all, there is someone out there who will find few more.

So, to celebrate this year’s bizarre Easter, I decided to share with you my favorite Easter Eggs I found throughout few years. I hope you will enjoy this list! 😊

1. The Lion King in Hercules

While most of the classic Disney stories from our childhood take place in one Disney-verse, Hercules discovered time travel. I mean, how else would you explain that in ancient Greece you would find Hercules himself, posing for a sculpture wearing fur covering his head and shoulders? And that fur being Scar? Kind of terrifying, but… He had it coming.

As you know, I love SW with all my heart, so any kind of reference or sweet tribute is always one, big “aww” from me. In Raiders of the Lost Ark, there is a hieroglyphic of R2-D2 and C-3PO, the might droids! I didn’t actually saw it the first time I watched it, but after third time with my dad it hit me! Clear as day.

Second great reference was “Club Obi Wan” in The Temple of Doom. I am not a very clubb-ish person, but damn me, I’d go there. Plus, I think it was more of a bar, maybe?

This was a gigantic shocker to me! I re-watched hook as part of the Movie Challenge (War movies – you will find out soon why!). I was going through the cast on IMDb when I noticed that in the bottom of the list was Glenn Close!!! This movie is great, but got loads better!!!

4. Daniel Craig in The Force Awakens

I was very proud of myself for discovering that one on my own! It was my second time with that movie, but for my defense – first time I watched it with polish dubbing with my dad, on annul father-daughter Star Wars and stakes date night. So, few days after when I watched it again, I recognized Craig by his voice. Yeah, I am weird like that. It took me two seconds to yell “OSCAR ISAAC” on Spider-verse.

5. Which is my favorite Easter egg number 5 – Oscar Isaac in Spider-Man: Into the Spider-Verse.

I am not even sure if he is listed in end credits, but who cares! This movie was full of Easter eggs, but I have to admit, this one made my heart skip two beats. Firstly, because I like Oscar Isaac. Secondly, because it was clear indication that they are planning on sequel. Yay! Can’t wait!!!

6. I am considering I have a bad feeling about this as Easter egg, and here is why.

This was very interesting finding for me, and I admit – I came across this while writing this post. It is a reference to the California Institute of the Arts, where many animators attended college – more specifically it’s number of the animation classroom. A113 is in Toy Story (license plate), Up (number of courtroom), A Bug’s life (box), Finding Nemo (camera), Incredibles 2, Monsters University (classroom).

Other movies: Avengers, Princess and the frog, The Brave Little Toaster.

8. The Iron Gian in Ready Player One

Did I just spoil myself that movie? Maybe, but well. It makes appearance during final battle. Spielberg homage to his favorite animated story. I really like that film, though. The Iron Giant. Broke my heart when I was a kid. I think it’s time to watch it again!

9. Speaking of cameos… George Lucas and Carrie Fisher were also in Hook!

They are the kissing couple in the opening scene. They float up, when Tinkerbell sprinkles Fairy Dust on them. It was super sweet!!!

10. We can all agree, that Spider-verse itself is one, big Easter egg, there is another one I like: The Weeknd.

Oh yeah, there are plenty of musical references in this movie, but nothing is what it seems. For example, there is no one by the name The Weeknd. There is though an artist called The Kisslnd and his record looks familiar. Kind of exactly like… Starboy?

This list could go on and one. Marvel, DC, Disney, Pixar, Star Wars – those are true Easter eggs mines! It’s fun to watch movie for plot, sure. But what a great adventure it is to go on a hunt! The satisfaction that fills your heart once you discover something so nicely “buried”, in a kind of “oh, we left it here? Well, maybe?” way? Hidden in plain sight? Fantastic!

What is your favorite Easter egg? Except the ones you made today? 😊 Happy Easter, lot!!!