Spirited away, the extraordinary love story 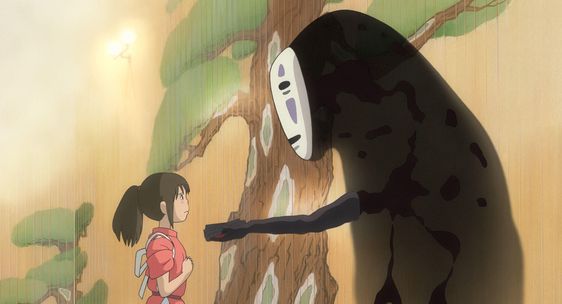 “Away” is something I’ve been thinking about lately – going anywhere away from here. It doesn’t really matter where, just… Away. Studio Ghibli is a definition of pure escapism. While I am on my 2-week vacation (we hit the road yesterday, we are in Croatia!), I decided to finally give it a try – after oh-so-many recommendations. And you know what? I love being late to the party.

For me, Spirited away was the most well-known Ghibli movie, for some reason it was the one I always wanted to watch but never actually found the time. However, my journey with the Studio started with… Princess Mononoke! Few months back, during a movie podcast at work, I asked movie club members to give me ideas/wishes for upcoming podcasts. After all, I can spend all of the Wednesdays talking about Dune or Star Wars, but… 😉 And Marta threw Studio Ghibli out there and I decided to give it a shot.

I admit it took me a lot of time – like with Star Trek or FRIENDS – but you know what I noticed? I enjoy the ride more! The older I am, the more I can savor it. It is a way for me to freeze time for a minute (or hours). Why? Because some of these things that I (re)discovered were in its glory when I was a kid. Some would say that I missed out a lot, but to be honest? I think I appreciate it more now.

Princess Mononoke made me draw one vital conclusion about Studio Ghibli – their movies are designed to confuse at first. Mature theme wrapped in a “young” flesh. This movie was a hook and I fell for it! There was no other option – Spirited Away was next in line.

I finally get a bouquet and it’s a goodbye present. That’s depressing.

Let me say this upfront: I did not expect such a wonderful story about true, unconditional love. What seemed as “adoration at first sight” turned out to be something, that was… Destined, written in the stars, far away. And this movie is not only about love between Chihiro and Haku. It is also about toxic love between a mother trying to shield a child from everything and “blind” love for material goods. So many layers, so many things to think about!

Spirited Away premiered in 2001 and I cannot believe (in a positive sense), how wonderful the animation was (and still is). The drawings!!! Absolute art and a complete visual-pleasing experience. Directed by, of course, Hayao Miyazaki – co-funder of Studio Ghibli, director, screenwriter, author and manga artist. In other words: multi-talent.

The film tells the story of a young girl Chihiro, who moves to a new neighborhood (and as you can imagine, it’s the end of the world for her). Accidently (or was it?) she enters the world of Kami – spirits of Japanese Shinto folklore – and magical things happen, not necessarily in a good sense. Her parents are turned into pigs and she is forced to take a job in a bathhouse, to survive.

A human! You’re in trouble! You’re the one everyone’s been looking for!

My friends and I often talk about movies (Otmane does not like superhero cinema haha) and what we look for while watching and Studio Ghibli gives something for everyone – escape to fantasy realm, life lessons and hope. For me it was all 3! Finally, I was away – away from worries, from work and life.

Chihiro was forced to start working in a very peculiar bathhouse – it was a place where all tired spirits came to rest and relax. And do you know what it reminded me of? Hug for your mind. A place where your soul and spirit and MIND can take a relaxing bath and just rest. Unfortunately, the bathhouse Chihiro worked in was not the most pleasant place. She did the best out of it and her kindness paid off. But let’s focus on the themes for a minute. Supernaturalism, Japanese folklore and fantasy are the most distinct ones.

But similarly, as in Princess Mononoke, in Spirited Away we deal with environmental issues (how Chihiro deals with “stink spirit” and struggle she went through to clean it up, which is a direct link to how humans produce pollution and how carelessly we throw trash away, I mean a bicycle? Really?) and Western consumerism. All that in a very subtle way, but with dead-serious consequences, so when we think about a moral – lesson if you will – it hits hard, but straight to the desired point.

For some reason, I can remember Haku… from a long time ago… but I thought I never met him before!
Oh, that’s a wonderful place to start! Once you meet someone, you never really forget them.

Love. Love is what got me teared up – the pure, truly unconditional and most “mighty” superpower of all. I am glad that it wasn’t only glorified in Spirited Away, no. It was shown in every shade – innocent, beautiful, daring, toxic and unquestioning.

As the movie progresses, we get subtle hints that Haku and Chihiro met before – one way or another. It was a spiritual experience, as Haku saved her life, years before they met. And they were drawn to each other immediately, saving one another all the time. For a minute there I thought our heroine forgot about her parents – the “Western consumers” who were turned to pigs. But she never did, and in the ultimate moment, she managed to save them.

What I really enjoyed as well was the toxic love (oh boy, that sounded poorly) that Yubaba had for her baby (hardly a baby, though). She wanted it to sleep and play, but mostly sleep – under the “dome”. Yubaba fed the baby with stories of how ugly and dirty the outside world is but when Zeniba (the twin sister) transformed it into a mouse… That was a positive experience, an eye-opener for the baby.

But I am drifting away from the wonderful love of Chihiro and Haku. When the girl arrived at the 6th station and exited the train that never goes back to return Zeniba’s seal, she didn’t know what to expect. She wanted to save Haku.

I think the train journey is one of my favorite scenes in the entire movie. For me, it represents transition – from a little girl into a full-time heroine. And you know what? Spirited Away was created without a script. Pretty much like most of Miyazaki’s movies. He just goes with a flow, while drawing storyboards. So in essence – it is a film written with drawings.

Miyazaki is very often praised for the realism of his movies, and this is also the case with Spirited Away. I cannot believe how much work he is putting into the things he does. Attention to details is what makes his movies so real. And beautiful.

And did you know that names in the films meant exactly what these people were? Boh mean little boy or son while Yubaba is bathhouse witch. Her sister, Zeniba – money witch. Kamaji means old boiler man. Amazing!! No wonder it won, hands down, the 75th Academy Award for Best animated film – setting some kind of milestone, for the first non-English and literally “hand-drawn” movie to win.

Once you do something, you never forget. Even if you can’t remember.

Who would have thought that Studio Ghibli would be such a fun, spiritual and deep ride for me? Spirited Away was for sure something my mind needed – an escape with morale. From one side, it was a great comfort-watch, but on the other hand a deeply profound introduction into a great world. World of folklore, magic and important issues – so universal yet amazes with every watch.

Oh, and the soundtrack… I finally understand.

4 thoughts on “Spirited away, the extraordinary love story”