Love in times of Monsters 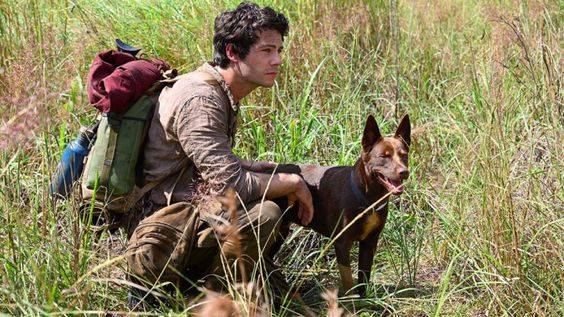 I remember that I was pretty excited once I saw trailer for this film but I… Completely forgot about it one minute after. But it felt really goofy, light and even though the title features monsters, I thought that this could be a good movie to chill after long-ass week. And let’s be honest, Lot. Isn’t this exactly what we need?

I’ve been sensible all my life. It’s gotten me nowhere.

Strangely enough, development of Love and Monsters started back in 2012, but it lingered until 2018 when Dylan O’Brien joined the cast. The film was originally going to be released February 2021 as a cinematic feature, but due to the COVID-19 pandemic, Paramount Picture decided for “on-demand” release and this was a great idea. See, there are films that should be watched on big screen, and there are films that it is better to watch at home, with some of your favorite comfort food – veggie chili from Jamie Oliver, best served with under-cooked rice, hot cup of tea – spiced with cinnamon, slice of orange and raspberry syrup.

Even since the pandemic started, I had to change my modus operandi, when it comes to moviegoing – cinemas were closed till June (and closed again till December 27th) so, naturally I had more time to watch movies at home. And you know, the Movie Challenge I created was for me to motivate myself to watch more films – not to re-watch my favs 😉

The plot of Love and Monsters is quite common and can be simplified to one sentence: all for love. Is there greater motivation to travel across the country, with nothing but a crossbow and youth wit, to search for long-lost lover? Call it cheesy – because it is. You know I am always down for any kinds of patterns. AS LONG as one use them wisely. Besides, trust me – it’s really hard to come up with innovative stories.

But this is not the point – my friend Otmane says that some movies are for strict entertainment purposes only. There is no need to always be “deep” and “meaningful” – we need fluff and love and goofiness just as much. Love and Monsters is exactly that.

We meet Joel (Dylan O’Brien) as a puppy-eyed teenager, who tries to live his youth as any teenager would – snuggling with a girl, completely carefree. But an asteroid crashes on Earth and alters life as we know it. Suddenly, the world is filled with fear, monsters and little less love. Joel gets separated with his girl but he promises to find her.

After living in an underground colony for 7 years, with a “newly found” family, Joel decides that it is time to change his life – or rather take back his previous life.

Welcome to the apocalypse, kid. The food sucks. At least you’ll never know what you’re missing.

The thing you should know about Joel is that he is not a hero type. He seemed like an introvert, kind of clumsy type of guy – not the one that would risk it all and sacrifice the safety of sacred shelter to get the girl. And this vibe was carried throughout the entire film as a running gag: You stole the food, didn’t you? Nobody treated his quest seriously; everyone thought that he was banished for this unspeakable deed in times of apocalypse.

I glanced at the bowl of veggie chili – roasted sweet potatoes, colorful bell peppers, red beans and diced tomatoes and heck no, ain’t nobody stealing my food. Especially the comfort food, the one that lifts my spirit on a rainy day. Sometimes I wonder how we would manage in this kind of event.

I mean, just think about it – the COVID-19 pandemic showed that we are adaptable, under any circumstances: wearing masks, keeping distance, staying safe. Working from home, watching films at home TV, hanging out with friends in the woods, with them doggos. But the monster apocalypse… Wow. Even though I watched The Walking Dead and a few post-apo films, I don’t think I would make it.

You can always tell in their eyes, just look at their eyes.

There were moments in this film that I found disgusting – and yes, I am talking about the monsters. And that only means that in terms of technicality, they were created pretty damn well. I admit, I had to cover my eyes a few times, but that’s fine. You might think that all monsters are… Well, what the definition dictates: any creature so ugly or monstrous as to frighten people.

And here comes the sun, y’all! In Love and Monsters, not every creature is bad. This is one of the lessons that Joel learns the hard way, when his paths crossed with a pair of survivors – Clyde Dutton (played by Michael Rooker, which was an absolute treat!) and little Minnow (portrayed by Ariana Greenblatt – I so loved her hair!). Paying attention to what we can see in the eyes is extremely important – both when it comes to humans and animals. So, despite being an “apocalyptic” kind of movie, I’m really glad for all those beacons of hope.

And that is what makes this film perfect for lock-down – it’s full of small things that will make you smile. Joel is learning how to survive outside of his comfort zone. Love that drives him to do heroic things is one of the most satisfying character’s transformations I’ve seen in years.

A hero’s journey would not be complete without a few elements: a mentor, that I already introduced. I really liked the dynamics between O’Brien, Rooker and young Greenblatt. Two experienced guiders and one foolish and naïve boy who tried to learn as much as possible – about the good and bad, about survival, about life.

Tell me, lot – you know I am your teacher when it comes to writing craft. What else is there? A sidekick!!! And there is no better secondary character than… A dog. Mic-drop, thank you for coming to my TED talk. Kidding, but hey – I adore the idea of “silent” sidekick So, in the beginning of his journey, Joel meets a dog named Boy, who lost his caregiver.

Of course, there had to be a fallout between them but in the cumulative moment, it all worked out and love won, again. Because you see, while Joel started his quest to be reunited with his teenage love, Aimee. But in the process, he discovered that after all those years, things changed and maybe this wasn’t the love he was looking for. No spoilers, though! 😉

There is no mission more admirable than love. Every sailor knows that.

Love and Monsters proves that you don’t need much – star-stack cast or extravagant plot – to make a good film. Let me be clear: I am a fan of Dylan O’Brien, I know him from way back (Teen Wolf, The Maze Runner, American Assassin) and I never felt disappointed in his performance. He showed that he can be goofy as Stiles but deadly as Mitch Rapp. He is the young generation of actors and I am hopeful that he will do good films in the future.

As for the rest of the cast – Michael Rooker, y’all! I don’t know if he is in the trailer, I guess it is, but like I mentioned – I completely forgot about this film. He is one of my favorite actors of all time and his character was just as imagined – a mentor, that tries to pour as much knowledge on his student, as possible.

What I also liked about this film is the sense of comfort that one can find in the family – not necessarily in blood, but in bond. Having a trusted, loving and merry bunch around you, in times of monster apocalypse is the solace for aching souls, overthinking introverts and loners out there.

I don’t want to die all alone at the end of the world.

Certainly, this isn’t the best film of 2020 but it’s a damn fine one – if you are looking for Friday night entertainment and you don’t mind scary looking monsters. After all, it carries a very powerful yet simple message – being alone sucks. But please, don’t ever think that this is just about romance. Sure, it is important in life but… Okay, let’s assume that you have it now – you found the one. But just a while ago, you managed without it, right? So, you get my point.

The key thing is to be around folks, that makes you feel like home, no matter where you are; or what the situation is. Find your pack and remember what Booker T. Washington said: “Associate yourself with people of good quality, for it is better to be alone than to be in bad company”.

4 thoughts on “Love in times of Monsters”

Thank you @cupcakethief_traipse for making me look

When in doubt, remember about David Lynch ❤️ @

"That weird sky was full of pinks" "I remember it