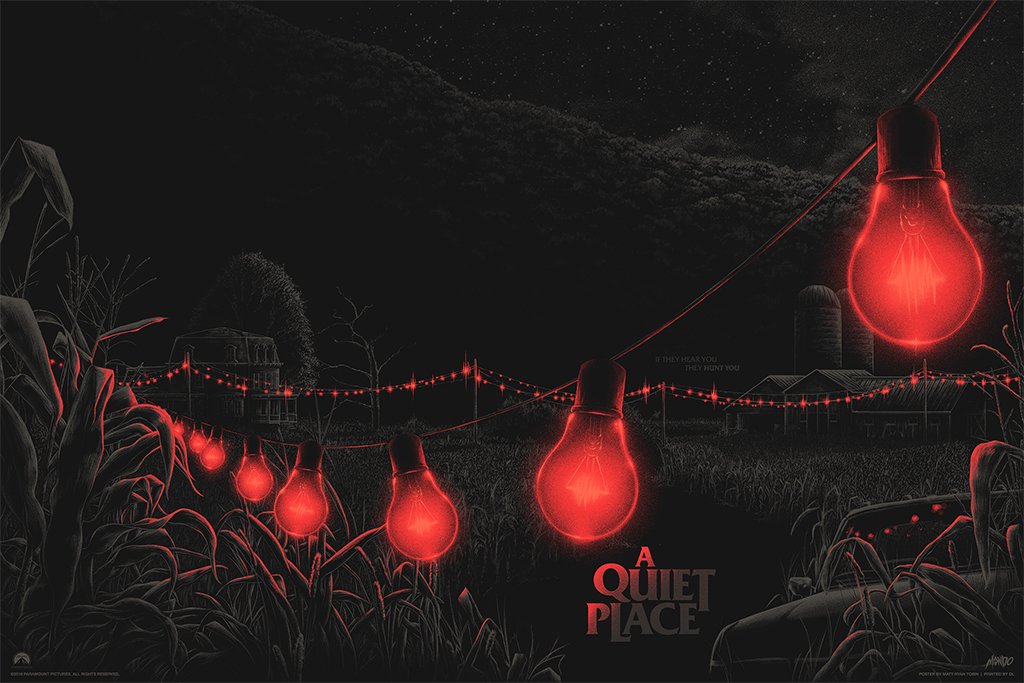 Quiet love is one of the main themes in A quiet place – a thrilling, edgy and sometimes scary film, by one of my favorite people in cinema. John Krasinki said that he wrote this film for his daughters. Sounds weird? A bit creepy, considering that it could be the best horror film in the last decade?

I wanted to watch this film, I knew this day would come eventually – after A quiet place premiered in 2018, it became an instant hit. Krasinski wrote the screenplay with Scott Beck and Bryan Woods – friends who grew up together in Iowa; who had watched numerous silent films in college, and finally began working on the story that led to the film. The concept of parents protecting their children was something close to John’s heart –Emily Blunt, his wife, just gave birth to their second daughter.

For me, it was another horror movie, but with faces that I actually like. Still – it wasn’t Krasinski or Blunt who convinced me to watch it. Turns out, all I need to survive a horror film is… Sequel and Cillian Murphy. Haha, kidding! I was curious what was so great about this film and the sequel turned out to be THE occasion that I needed. And guess what? Love was pouring out the screen.

And of course, it made me think a lot about my parents too. I can see how much they are helping me with my new apartment. My mum is doing all the “heavy lifting” with planning, coordinating the crew, buying stuff (with my money, of course), making sure that I stay sane in the process. My dad is doing the actual heavy lifting – tiles, flooring, kitchen, equipment… His garage is stretched to the limits. But… Is there a limit to parental love?

Being protective about your closest ones – friends, family – resembles skating on thin ice. It is a wonderful concept, that’s for sure. Dangerous one, too. It is very easy to tip the scale, to go from one extreme to another. And I think most of us experienced both. Every parent is an amateur in the beginning. They learn as we (as a family) go, and that is something every kid should remember at some point. Parents never outgrow protectiveness.

I look at my parents now, worried how I’m going to make it on my own. Being single in this wild, wild world… For them, that might be an obstacle. For me? It’s a blessing. Don’t get me wrong – it’s great to have someone by your side. One of the best feelings in the world. But there is absolutely nothing wrong with tackling life and all the bullshit on your own. And when the timing is right, magic will happen.

A quiet place shows every shade of love and protecting your family. Lee and Evelyn were put in impossible circumstances, and they were not perfect. The movie kicks off with them making a supply run. It made me think about the first episodes of The Walking Dead and the amazing Telltale game (that I should buy, like, RIGHT NOW). There was some kind of apocalypse, though no backstory. That was something unexpected, but also fresh! Perhaps the sequel provides some insights, but I can live without that knowledge, to be honest. And those who criticized this approach, missed the most important thing about this movie: it wasn’t about the apocalypse or the creatures. It was about love.

You still love her, right?

Now, I know that parenthood is a difficult topic and there are parents in this world that are far from ideal, far from being role models. I don’t want to talk about the strugglers, the ungrateful people who should never be parents. I want to talk about love. About devotion and the ultimate sacrifice. Even the best parents can fail, and that is something that should be calculated in the “professional risk”.

Lee and Evelyn were very strict, but loving people. They did their best. And I, as a child, often took that for granted. See, rules and discipline are in place for a reason. If it wasn’t for them, I wouldn’t be the woman I am today. And as a kid, I hated some of my parent’s rules. I hated them! I think that is something that Regan, Marcus and Beau had difficulties understanding.

Because it all comes back to the most crucial thing in life – communication. And they were living in a world of silence. Which is the world we sometimes live in, too.

The characters communicate in American Sign Language to avoid making sound. Have you ever tried to keep your kid quiet for 10 minutes? It is nearly impossible. But those were the circumstances, that was how the world looked like. Let’s take a break right here and think how many times an argument could have been avoided, if only we communicated better? Talking about love, love is all about how we express it. Verbally? With gestures, with gazes or smiles…

Creators of the film put  a lot of effort into the details. They even hired a ASL interpreter for deaf actress Millicent Simmonds (Regan Abbott), so all the talking on set could be translated back and forth. She also helped teach her fellow castmates, which was incredibly sweet. But silence was just as important, it was the way of communicating and a protagonist of the film. If you think about it, in the film there is only about 25 lines of voiced dialogue.

And one of the “goals” of the silence was keeping the audience on the edge. I asked my friends if this is the kind of film I would be scared to watch. One of them told me that it is more of a gripping thriller, and that there is not much scare going on. And it was a great description! Sure, I watched in the morning just to be sure I will not have any nightmares, but it was more thriller-like, rather than typical horror.

And again – when you think about A quiet place as a love letter to Krasinski’s children… The scary part makes total sense. After all, parenthood and all that comes with it – tough decisions, rules, doing what is best for the kids – is the scary part.

I love you. I’ve always loved you…

John Krasinski said that he wrote the role of Evelyn with Emily Blunt in mind, even though they have a rule not to work together, but in this case… Well, there are certain exceptions. And I must say, they have a great chemistry outside the screen but what they both did in A quiet place was brilliant. Existing in impossible circumstances but making the most of living – having intimate moments, having sweet moments… You can just tell it’s not only happening on the screen.

Biggest applause should go to Emily Blunt. I don’t have many favorite actresses, but she is in my personal top, and the bathtub scene is the crown jewel. Shot in one take only, made its way to the “acting textbook” forever. Evelyn Abbott overcame something unimaginable and carried another life inside of her.

Looking at this film from the backend, I enjoyed it; the technical side as well. The creatures were… Well, horrible  – but in a good way. Much like in Love and Monsters, they were very well done. And fun fact: John Krasinski played the creature in a motion capture suit for a few scenes.

A quiet place was a great, great movie. Perhaps not the best horror for some, but a wonderful, twisted and different love letter to your closest ones. Made me appreciate my parents a bit more, for everything they are doing now… But most importantly for all the things they have done. Can’t wait to see part two in the cinema!

3 thoughts on “A quiet love letter”