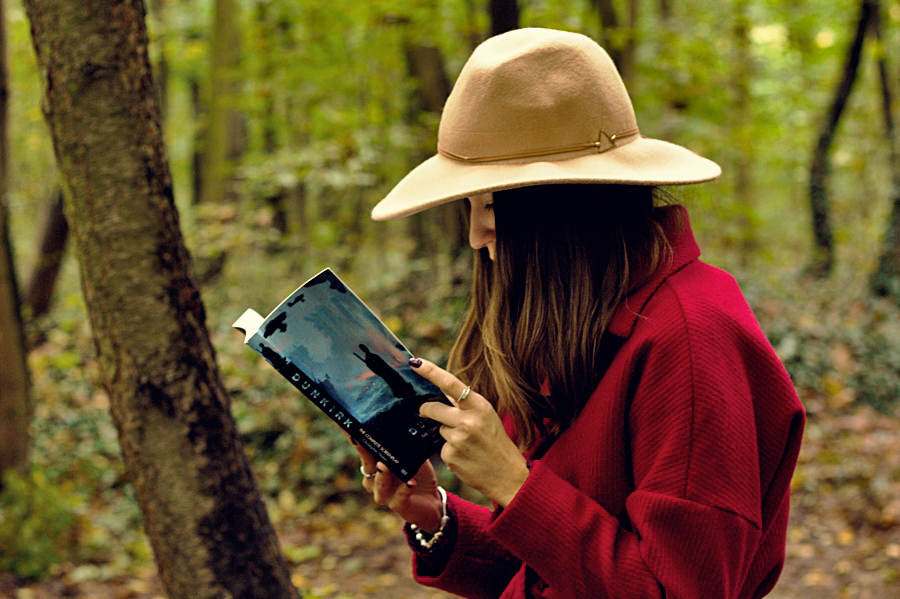 Nolan’s Dunkirk is not another war movie, that simply tells us the story. With Nolan nothing is what it seems, even historical film. Time plays a vital role, once again, but getting the grip on it is really hard. All the tricks and cheats Nolan used are hard to catch even for a detective’s eye. Why Dunkirk is one of the best, most captivating yet very stoic war films then? Is it the visuals? The music? Or maybe the story itself?

Christ. I mean, you can practically see it from here.
What?
Home.

This year for my birthday, my dear friend Monia gave me the complete script of Dunkirk, knowing how much I love Nolan. True, she wanted to give me Inception, but hey – I am not complaining. I love it so much! Except for the script, there is an intro by Chris and his brother Jonathan, discussing the film. Best part though? Storyboards.

Are you familiar with the storyboarding concept? When I was doingmy “Inspiring” training cycle at work, there were multiple lectures from that area. And even though I knew that term from the filmmaking process, it turns out it is often used in the corporate world as well.

But do you know where it comes from and what is its purpose?? A storyboard is a graphic organizer that is composed of illustrations or images displayed in sequence for the purpose of pre-visualizing upcoming projects (like film). The storyboarding process, in its current form, was developed at Walt Disney Productions during the early 1930s, after several years of similar processes being in use at Walt Disney and other animation studios.

TV shows have pilot episodes and filmmakers go for storyboarding which is amazing, just look at those drawings – imagine you are the Warner Bros Studio and Chris Nolan came to you with them to explain how he can turn this story into something extraordinary.

The mole it is then, gentlemen.

Believe it or not, but Chris Nolan never wanted to make a war movie and, in a way, he kept that guard – Dunkirk is a survival story. Oh, before I forget: there is on genre that Nolan still wants to explore, horror films. How do I know? Form our last encounter of course! Back to Dunkirk though. In his own words: “I wouldn’t be comfortable doing what I consider to be a war movie, never having fought in a war. You always feel a bit fraudulent as a filmmaker. I would feel truly fraudulent. Whereas a survival story, I can tap into that emotion”.

Why do I consider it as something new and absolutely great? It is a suspense story, kind of like a ticking clock. The fact that it’s happening within 3 “different” timelines is adding to the overall feeling of disturbance. It is a tough film as well – I’ve only seen it thrice; first time in 2017 when it was released,second time with my mum in March (lock-down cinema, baby) and third when DCF had me over for “Nolan’s best”. And each time I felt anxious.

There is a technical trick Nolan used in Dunkirk to keep us all on the edge, but did you notice that we don’t see the enemy, till the last shot? And even so, it’s out of focus. We know the enemy is out there, but there is no direct encounter. Isn’t that terrifying? You can feel that warm breath on your neck, but when you turn around, there is nobody there. In Dunkirk more than in any other film, we can feel that we are in it. Do you remember my Nolan case study? Journey from point A: I know where we are to point B: How did we get here? This vibe is so strong. By not showing the enemy – Germans – Nolan turned this story into poetry, and possibly created the best “not-a-war-film” since All Quiet on the Western Front.

Is he a coward, Mr. Dawson?
He’s shell-shocked, George. He’s not himself. He may never be himself again.

Another thing that contributes to overall anxiety is the twisted, yet very logical timeline Nolan presented: The land (mole), the sea and the air, respectively happening in one week, one day and one hour. Once again, we deal with non-linear storytelling which should be, by now, the signature move of Nolan. However, this time those 3 timelines introduced, had a purpose of emulating Shepard one in such a way, that it “provides a continual feeling of intensity”.

Let’s talk about it. Here is the best definition of Shepard Tone: “an audio illusion that creates the feeling of consistent, never-ending rising/falling. The illusion is achieved by playing overlapping notes that are one octave apart. For this reason, it forms a Shepard Scale, each scale fading in and fading out so that the beginning or end of any given scale is indistinguishable. In this way, the sensation of rising or descending notes never ends” (via studiobinder.com).

This wasn’t Nolan’s first rodeo with that trick, he and Dave Julyan used it in The Prestige back in 2006. He said then: “How do you create a sound for the music that is continually rising in pitch, but never gets anywhere?”.

So in Dunkirk, there are three storylines that peak in different moments, and the idea was that we always feel like we’re about to hit – when we’re hitting the climax of one episode of the story… Then another one is half way through and the third is just beginning. Interesting fact: the entire script was based on the Shepard Tone structure.

I learnt something from my recent Nolan date – each of his films is personal, in a different way of course. But if he had to choose which one, he couldn’t. “It’s like choosing which of my children is my favorite, you know?” he said and I fully agree. As an author, I write what I know. This is my principle and if you would ask me which one of my texts is most personal (including reviews), I could not pick. They all are – some more, some less.

Nolan’s grandfather was a RAF (Royal Air Force) navigator. After Chris visited Dunkirk, he went to Amiens to visit ancestor’s grave. This for sure was another little stone that contributed to the idea for the film. There was always a connection for the Nolan brothers and World War Two – it was their dad’s experience, losing father at such a young age. And have you noticed that bit in Dunkirk: Mr. Dawson’s ability to tell almost any airplane going overhead? Christopher said: “That’s Dad. It went straight to the film”.

How hard is it to find a dead Englishman on Dunkirk beach? He didn’t kill anyone. He was just looking for a way off the sand like the rest of us.

I asked myself, what feelings I could associate with Nolan’s Dunkirk before and after researching to find out more about “behind the scenes”. My initial reaction was surprise. I remember that exactly – July 2017, full cinema and I was the last one to leave. After credits rolled in, I just sat there completely surprised. You should know that back then I wasn’t “into Nolan” – not for the intellectual aspect anyway. I enjoyed his films, but never paid much attention to backstage. After the obvious astonishment, emotions came crashing down – fear, anxiety, pointlessness of war, war that turns men into animals. This was a “war movie” but not like any other I’ve ever seen.

Watching it again with my mum, I knew more about the tricks Nolan used – Shepard Tone. I thought I would be ready for it. And even though I remembered it (not very much apparently, because I couldn’t stop thinking about what the heck happened to Tom Hardy’s character), I was still on the edge of my seat. Now I know that there is no way to cheat our brains.

Third time made the biggest impression on my heart and mind. In DCF I picked the middle row and middle seat, so I was practically in the center of the events. There were some people behind me, but nobody in front or next to me. That gave me a quality feeling that I am there all by myself. Only Christopher Nolan whispering into my ear: let it sink in. Feel it. You are there, but do you know how did you get there? Something will happen, you know that; you know Dunkirk’s story. But where is the enemy? Where will the strike come from?

Well done, lads. Well done.
All we did is survive.
That’s enough.

One might say that I am biased with my feelings about Christopher Nolan. Especially when he comes in pack with Hans Zimmer. And I will not deny it, but I hope that this text will change your approach about Dunkirk. It is all a matter of perspective and I like to think that Nolan and I share mental connection.

Zimmer’s soundtrack is something new and I would not call it “typical Zimmer score”. It contributes to the ticking clock concept. After all, they did record Nolan’s pocket watch and mixed it into the score. So the tick-tick-tick-tick sound you hear is very real. And it is one of the best scores I have ever heard in my life.

This film, whether you watched it in IMAX or regular cinema, or even TV is loud. Extremely loud and this is yet another element that makes you believe you ARE THERE. With the soldiers packed on that mole. With Mr. Dawson and “Shivering soldier” on the sea. With Collins and Farrier in the sky.

Nevertheless, I am very careful while recommending this film. It is a lot to process and with Nolan “time play”, Dunkirk is dangerously overwhelming. Another film that I wouldn’t watch because I was bored, oh hell now. It leaves a mark, that I will not be able to shake, ever.

I’ve said it a million times already, and I will say it again: Damn you, Christopher!!!

CATCH UP with (not yet) complete NOLAN-PACK