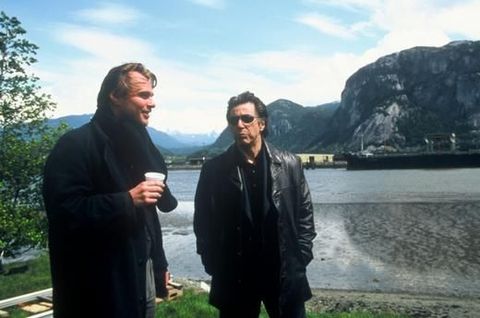 Insomnia was one of the two Nolan’s movies that I haven’t seen yet. This mysterious thriller was critically acclaimed for the script, direction and acting. While Al Pacino’s character felt familiar, seeing Robin Williams in such a dark role felt refreshing.

This guy crossed the line and didn’t even blink.

I was looking for an excuse (like I even need one…) to watch Christopher Nolan’s film in the summer. There is something about Nolan and summer, few of his things came out in July throughout the years. Insomnia was on my list for some time and since in the Movie Journal concepts in June there were good and bad remakes… Well, that was my excuse.

It was a remake 1997 movie of the same title, directed by Erik Skjoldbjærg. As the lead character – Stellan Skarsgård, which makes it even more interesting to watch one day. I really wanted to do it, but I couldn’t find it anywhere. But! You never know. In both movies the plot was pretty much the same, even though Nolan wrote the final draft of 2002 script his way. But, what’s interesting, he does not have a writing credit on this film, nor did he ask for one.

And having watched almost all of Nolan’s films, this one felt completely different. It was almost too normal. Nothing inexplicable was happening – and it was… New. This made me think a lot about beginnings, even though it wasn’t his “beginning”. Insomnia gave me something I felt was gone in my heart – hope.

You’re a good man. I know that. Even if you’ve forgotten it.

It’s been a while since I watched a movie with a flawed hero. And the amazing Al Pacino as Will Dormer was a textbook definition of man with a past. And the slow burn was just delightfully frightening, keeping you on the edge till the last seconds.

Truth being said, the crime – murder of a young girl from Nightmute, Alaska – is just a background of a much deeper problem. Due to its geographical location, Alaska gets a lot of 24h daytime. Well, it’s not like 6 months, which was a long-lasting urban legend, but still – there are weeks of constant brightness. For a pair of LA cops, it was something new and – I’m not afraid to use that word – exotic.

Nolan used the geographical angle to his advantage. As the film progresses, we witness all symptoms of insomnia, affecting the noir detective. Oh yes, he is so noir to me; even though the film is nowhere near that area. With every minute we see how the disease evolves with the protagonist.

But, hey, what is insomnia? Everybody knows the name, but do we really know what this illness is really about? We all have trouble sleeping, that is not uncommon. But I often hear people throw this word around, as a reason for one rough night.

It’s all about small stuff. You know, small lies, small mistakes. People give themselves away, same in misdemeanors as they do on murder cases. It’s just human nature.

Insomnia is (unfortunately) a pretty common sleep disorder – making it hard to fall and stay asleep; it’s a cause of waking up early and not being able to fall back in the arms of Morpheus. Research shows that 10 to 30% of adults suffer from chronic insomnia. I have a lot of sleepless nights behind me, but eventually I would doze off for 12 hours to recover. Even during anemia times, when sleep was not that effective.

Oh, that is actually another thing, the morning fatigue. But that was caused by anemia and stress. Right now, my numbers are just slightly above the norm, but that is progress. But insomnia sounds like a giant B. I don’t know anybody struggling with this illness, but deep down I wish I could help anyone who suffers from it.

We all know how magical the night can be – staying up to talk, watch the stars or how the night fades away, to let the morning glory in. But with insomnia, with one sleepless night after another… The night and all the demons are making it hard to appreciate the beauty. And that is how Nolan’s film makes it look like – slow burn of a mental problem, the demons haunting the old detective. Mix that with a mysterious past and that results in an amazing film.

Nolan made Insomnia personal, following some of his favorite themes: subjectivity of truth and lie, control or the lack of it until something traumatic happens. He stayed true to the original plot-line, so we are witnesses of a murder investigation of a small-town murder, but he added the Internal Affairs piece, to spice things up.

And to highlight the flaws in our hero. His partner’s testimony can bring him down, for what he’s done in the past, but a plot twist turns the scale into his favor. For every win for Will Dormer, his insomnia takes something from him. Let me say, Al Pacino is great in this movie – both irritating and amazing. And his nemesis, Walter Finch uses every bit of the situation to mess with his head.

Pacino and Williams had a great chemistry on screen, even while simply talking on the phone. Their “relationship” felt like walking, or even skating, on thin ice. One false step and things could have gone terribly wrong. To be honest, Walter Finch was one of the most brilliant killers in the cinema. Most psychotic, most vicious and notorious. A great opponent to experienced cop, but also a great lesson for a young protégé.

You and I share a secret. We know how easy it is to kill someone. That ultimate taboo. It doesn’t exist outside our own minds.

I gotta say, for me Insomnia felt like an experiment. Perhaps he wanted to use the light, the constant light of Alaska’s night to showcase the main theme: the cop feeling guiltier than the killer he was chasing – isn’t it brilliant? And even though in many interviews Nolan has admitted that it wasn’t as interesting, as “intense” as, let’s say, Memento, but… This was Nolan’s first studio film. First time working with “big shots” like Pacino, Williams and Hilary Swank – three Oscars winners.

In a way, it was his ticket to Hollywood, but as it is with Christopher Nolan, he walked in on his terms. He literally had zero time to rehearse with the actors, so they were going scene by scene, night before shooting it. The really close close-ups were a surprise even for Pacino, but that’s how Nolan decided to tag us along on the hero’s journey. We are with him, on this slow burn, but it’s only slow for Dormer, not us. The audience is put right in the middle of the mess inside his head.

So, why is Insomnia the im-perfect remake? It’s perfect, because Nolan took the exact plot from the 1997 movie, changed just a few things and as a result, the entire relationship the audience had with the original film, has changed. The imperfection came from not yet shaped perception of memory, that Nolan developed in his later movies. But hey, that’s just one small thing. However, if Insomnia taught me something, is that it is all about the small stuff.

Lastly, from what I read, Norwegian Insomnia was much more raw, ruthless and… To the protagonist, everything was meaningless. It was obvious that for a Hollywood version, some of that cold, Scandinavian attitude had to change. This is why I am not a big fan of remakes. Unless it’s Dune, but we all know that.

Must be hard to concentrate on this case after 3 days without sleep.

Insomnia is a heavily grounded film, with a delicious slow burn, that will keep you on the edge of your seat. I know how it sounds – how can a slow burn be exciting and thrilling? But with Nolan, everything is possible. The flawed hero, who isn’t really a hero – maybe he is a cold-hearted killer with a motive? Or maybe, just maybe he made an honest mistake?

The chase scene, all foggy and absolutely terrifying, was one of the best sequences in the movie. Add David Julyan soundtrack and the picture is complete. I love the way Nolan decided to take one mentor relationship – Pacino and Swank had a good run on the screen. It wasn’t a typical worship relationship, it was more like observe, learn and be better.

But what was absolutely my favorite thing, was using Robin Williams’ character as Will Dormer’s conscience. He was literally whispering in his ear through a phone. This made the guilt unbearable, to the point of feeling complete… Nothingness.

I would recommend Insomnia to all of you lot, because it is something completely unexpected, when you think about Christopher Nolan. But, as we all know, each of his movies is different – even though the themes and motives follow a certain pattern.

One thought on “Insomnia, the (im)perfect remake?”