Begun, the Clone Wars has! 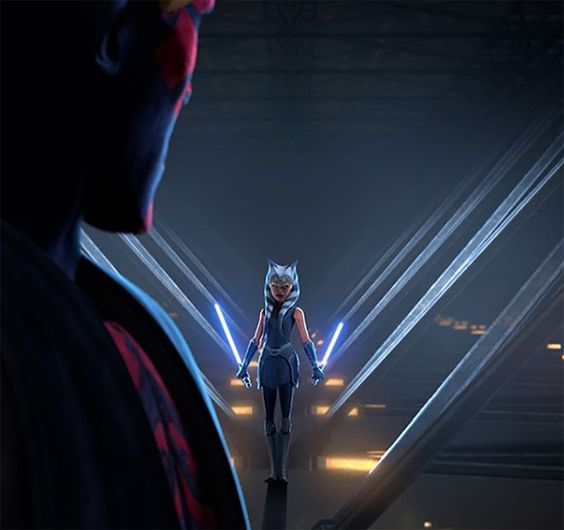 Begun, the Clone wars has, said Yoda long time ago, in a galaxy far, far away. Famous words from Attack of the Clones echoed in my head for quite some time now. For sure, re-watching this series triggered all the memories associated with Prequel trilogy, but also Movie Challenge – in May we had “Star Wars” films (but not just them, it’s a concept, y’all!). So, yes – I watched Episode II and III again (hello there) and decided that I should watch animated series again. Because as it turned out, I watched it all wrong! Yes, there is an order of watching. And yes, I will post it for you by the end of this post, so… Keep reading! 😉

Fears is a disease;
hope is its only cure

My story with Clone Wars started 10 years ago, when I was visiting my family in Germany. So yes, the first time I heard about this show and watched one of the episodes, was in a country that dubs everything. And I mean. EVERYTHING. I love this language, I truly do but. Imagine my surprise when in 2012 I went to The Dark Knight Rises premiere with my uncle. Back then, I wasn’t aware that they are dubbing those kind of blockbusters Hollywood movies. They do. Luckily, they have “one” actor to always “play” one part – so in all three movies, Christian Bale was the same person. Or, at least they sound the same to me (Yes, I watched The Dark Knight Trilogy in German). Nevertheless, it was super weird!!! Great learning experience, but at the same time bizarre. This wasn’t Christian Bale I knew! Anyway – hearing Clone Wars for the first time in language other than English or Polish was not half bad. I was very proud of my German skills, I understand everything!

My first impression of the show was positive. It’s Star Wars so, you all know that I don’t need much. But does not mean, that I have no criticism – I am trying my best to be objective, but at the same time I just really enjoy it. And I was curious, to be honest. It was supposed to be extension of Attack of the Clones and road to Revenge of the Sith. On part VII of THIS PODCAST IS NOT WHAT IT SEEMS I talked with Marta about why she didn’t enjoy Episode III and she said something extremely important – Anakin’s transformation into Darth Vader was shallow.

Overconfidence is the most dangerous form of carelessness.

I couldn’t agree more. And let’s be real – that was exactly what creators of Clone Wars thought as well. After all, 7 seasons of the show serve as a journey to how Anakin became Lord Vader. And it’s a little bit more complex, than what we saw in Prequel trilogy, Padme dying at childbirth. In Clone Wars we explore series of events that got us to the breaking point of Episode III. Look, I am not saying that you should watch the series – technically it is on the official timeline, but… I understand it’s not for everyone. But if you feel like there is something missing, like there are some untold stories you would like to hear… Then I totally recommend you this show.

Other reason, except the obvious already mentioned, is that Clone Wars is just… Fun! Really, the sense of humor – especially of Obi Wan is great mood booster if you are feeling low. But also the adorable banter between Ahsoka and Anakin!

I have to admit though, in the beginning it was a little hard for me to adjust to “new” voices of Obi Wan, Anakin, Yoda or Mace Windu. After all, it’s so hard to replace Ewan McGregor or Samuel L. Jackson. When I was doing some digging on the series, I found out that voice actors, except their main characters, also provided for additional characters! Like James Arnold Taylor (I will talk about him more in a minute), besides being Obi Wan, he also did a voice-over for Master Plo Koon. Tom Kane did amazing job as the narrator but also Master Yoda and Admiral Wullf Yularen. And, of course – Matthew Wood as General Grievous or Battle droids.

A single chance is a galaxy of hope.

Ahh, few days ago I watched Disney Gallery: The Mandalorian and in this episode, Dave Filoni talked a little bit about how he and Clone Wars happened. He worked closely with George Lucas – became his apprentice. Now that I think about it, maybe it should be Dave – leading Star Wars franchise further? But let’s take a moment to understand my point of view: Filoni used to work at Nickelodeon. During the talk with Jon Favreau, he revealed that his obsession over Revenge of the Sith made him a source of all the work-jokes, where he was working as a director on Avatar: The Last Airbender. That almost made him pass on one of the most amazing gigs in his career. When he received a call from Lucasfilm Animation, he thought it was a prank, that someone from the Office set this up. Plus he had a long career with 2D projects, so when he heard that Lucasfilm is looking for someone to help create a 3D series… He was just being sassy throughout entire conversation.

It was after they scheduled the appointment, when Dave realized what was actually happening. He recalled last seconds of the conversation with the recruiter:

The interview with Lucas went even worse in Dave’s opinion – he though he won’t get the job. Turned out, that George really liked him and his vision and… This could’ve been the best decision ever.

Clone Wars itself is, like I mentioned, a show to enjoy. And when I read some more about development, in early stages Obi Wan and Anakin were supposed to be guests characters – the show focus was on Plo Koon or clone captain Rex. In the end keeping Obi wan and Ani as main characters with very strong supporting line, was a great idea – it allowed to fix plot holes and many flaws fans noticed in Episodes II and III.

When Disney acquired Lucasfilm and got the rights to Star Wars, it led to the massive purge of many books, comics and games, labeling them as non-canon material known as Legends. The Clone Wars survived and remained. Ahsoka even had a quick audio cameo in The Rise of Skywalker.

In 2008 when the show came out, was it not only the most-watched series in Cartoon Network history; it also got an entry in Guinness Book of World Records as the “TV’s highest-rated sci-fi animated series”, rivaling many great shows like Samurai Jack and X-Men (1992).

A true heart should never be doubted.

Full of Easter eggs (Darksaber) and awesome cameos (Mark Hamill), The Clone Wars is really something to watch. And do not be mistaken by the animation – it is not a kid’s show. There is a lot of death – clones casualties more than you can count, Jedi, droids… It really shows what war does and what is its price.

Plus. Every episode starts with awesome theme song (love the beat) and a sentence, that gives a little preview of lesson to be learnt.

Here are some extras for encouragement: The Voices Of Star Wars The Clone Wars Featurette and James Aronld Taylor’s YouTube channel, where he posts a lot of cool videos including series called “Clone Wars Conversation”. He invites guests – people he worked with on the show, like Anna Graves who did voice-over for Duchess Satine Kryze. Episode with her is heartwarming and there is a bonus in the end. Watch it, it’s soooo worth it!

HOW TO WATCH CLONE WARS

Here is the right chronological order of watching Clone Wars. All episodes are available on Disney+ and this list was created as per starwars.com

You can download the list from here – it’s an Excel file so you can easily track your progress!  I am currently by the end of season 2, where someone falls in love with someone and I hate it.

7 thoughts on “Begun, the Clone Wars has!”