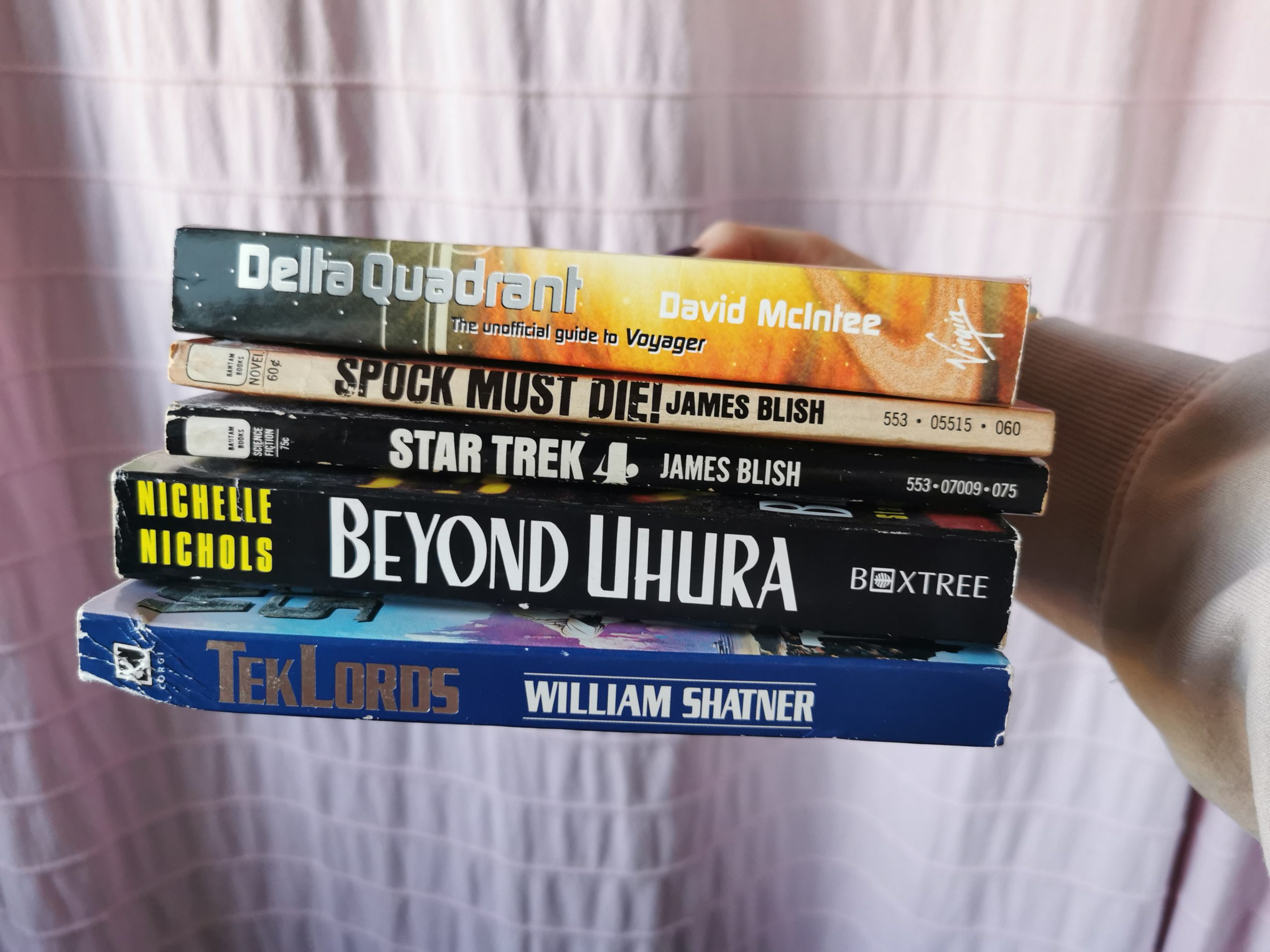 Live now; make now always the most precious time. Now will never come again, said Jean-Luc Picard once. You know what, Lot? I find Star Trek to be a great example of pure life affirmation. Did you know, that “Live long and prosper” salute 🖖 is in fact a Hebrew blessing?

One man cannot summon the future. But one man can change the present!

The hand gesture represents the Hebrew letter SHIN, which symbolizes the word EL SHADDAI, a name for God. The greeting first appeared in the second-season opening episode of 1967 Star Trek show, “Amok Time”. Considering that Vulcans were “hands oriented”, it makes a lot of sense. Vulcan finger-touching is a ritualistic form of affection. It involves the index and middle fingers. Contact ranged from a simple two-fingertip touch to tracing around another’s hand.

One might think that Vulcans are not that romantic or have no feelings, but there you go! Another proof of beautiful affirmation of life. Yes, my Star Trek books bonanza is doing well. What’s your superpower? 😊

I haven’t faced death. I’ve cheated death. I’ve tricked my way out of death and patted myself on the back for my ingenuity; I know nothing.

Live long, live prosper. Star Trek’s version of “May the Force be with you”. Or… Is it the other way around? 😊 I don’t think we should compare one franchise to the other. After all, Star Wars is a journey of one family. Even stories – they contribute to the Skywalker saga. Now, Star Trek is different. One of the main characters is USS Enterprise. Actually strike that. Not ONE OF. It is the main character!

And there is a pattern. USS Enterprise was destroyed or injured, harm or hurt. Get your hoot together, guys! Take care of your goddamn ship!

But the key difference is the Kobayashi Maru scenario, the no-win situation. In the ST universe, we saw it twice (in movies, because I haven’t watched the shows yet) – in the original timeline, which was kind of an admirable thing; and in the Kelvin timeline.

The purpose is to experience fear, fear in the face of certain death, to accept that fear, and maintain control of oneself and one’s crew. This is the quality expected in every Starfleet captain.

The prime lesson in Kobayashi Maru impossible scenario is that nobody, not even a captain, cannot cheat death. As much as it was pleasant to see 2250’s Kirk beat the unbeatable situation, I liked the Kelvin turnaround better. It was more real.

In order to live long and prosper, we must be humble. Aware, present. We must be here and now, appreciate what we have. Not think about death, no. But be mindful about it. It’s there, it’s certain. Now, how we are going to live our lives is a different story.

I, for one, am dreaming of being a “touch-and-go” kind of person. But not the one to disappear, no. I want to change and influence people’s lives. If I can achieve that, by exercising affirmation of life to the fullest – so be it. What about you?

MY ALL TIME FAVORITE. How is this film not trending, I cannot understand. It is completely illogical, as Spock would put it. Before I talk about Star Trek going green, I want to talk about the humor. Damn, this part was hilarious!

Don’t get me wrong, all of the Kirk-ones were funny. But the idea of them going back in time, with warp speed to save the 23rd century world from a probe, hovering over Earth and emitting coded whales sounds is absolutely ridiculous. Seeing the Enterprise crew thrown into the past was amazing. Spock trying to blend in, with his “They are not the hell your whales” … Oh goodness. This is when I realized that I am in for life.

But one of the most important aspects, which won my heart, was actually saving the humpback whales. Fighting to make sure that endangered species live and carry on in the future… Look, what I am saying is that we don’t have the possibility of time-travel. It’s impossible, this is why we must take care of our Earth right now.

The Voyage Home can be viewed as a separate, stand-alone good-green-propaganda film – important, with great message and absolutely contemporary.

Again with the humor. Kicking off with Kirk, Bones and Spock on vacation? Kirk free-climbing El Captain and falling off, only for Spock to save him? And the three of them sitting by the bonfire? This is the content I am here for.

Plot of the fifth installment was really good – it involved a rogue Vulcan, who was associated with our dear Spock. A turn of events allowed him (the rogue one 😉) to assume command over USS Enterprise and set course for the center of the galaxy. That was where he and his followers believed they had found the place from which creation sprung.

So, basically it was how Kirk and Bones met God.

And I thought that after humpback whales it cannot get any more ridiculous! Oh, Star Trek, I stand corrected…  That doesn’t mean that for a minute there, I wasn’t like “Are they actually gonna meet God?”… 😀 Then I remembered we are talking about Star Trek.

Technically-wise, I will admit that apart from the opening sequence (Spock flying down to save Kirk from the fall), it was really decent. Still, not great. But the effects didn’t bother me. What bothered me though, was the fact that this was the penultimate part with the old crew.

“I offer a toast – the undiscovered country – the future…” – I mean, ain’t that the truth?! Wow, what a great metaphor. Future indeed is something of an uncharted territory, no matter how thoroughly we plan it. Can you really plan it, though? I think that the universe always finds a way (much like life, eh, dr Malcolm?).

And you would think that there can finally be peace between humans and Klingons! The plot twist in this part was as good as in The Motion Picture. An interstellar cataclysm practically destroys the Klingon Empire’s home-world. That forced their Chancellor to seek peace with the Federation. A treacherous act of “attempted” assassination puts Kirk and Bones in the court spotlight. Prime suspects are sent to prison, and the crew of Starships Enterprise-A and Excelsior must uncover the truth before the conspirators can start a full-scale war.

I was at the edge of my seat all the time. For a moment there, I really believed that this is the end for Kirk and Bones… And that would hurt me a lot. This film came out in 1991, so the technical possibilities were much better and advanced, but like I have already mentioned – does it matter?

What makes one man an exceptional leader? We see indications that it’s his negative side which makes him strong, that his evil side, controlled and disciplined, is vital to his strength. Your negative side removed from you, the power of command begins to elude you.

The original series (of films) was an absolute pleasure for me to watch. I loved the crew, the chemistry between them and their amazing – yet ridiculous – adventures in space. Ultimately, they have saved the Earth multiple times. Star Trek is more about building, rather than destroying. The first priority is always seeking a peaceful solution.

I already watched the Kelvin timeline films (that was a little cheat from my side, but hey – that only means that I was excited, right?) and out of 4 with Picard, I have the final left to see. And then it will be time for all the Star Trek TV shows. Ah, what a time to live long, live prosper!!!

P.S.
Next part of my Star Trek adventures will be about the Kelvin timeline and believe me, Lot, it’s going to be so cool!

4 thoughts on “Live long and prosper!”