Venom is a man’s best friend! 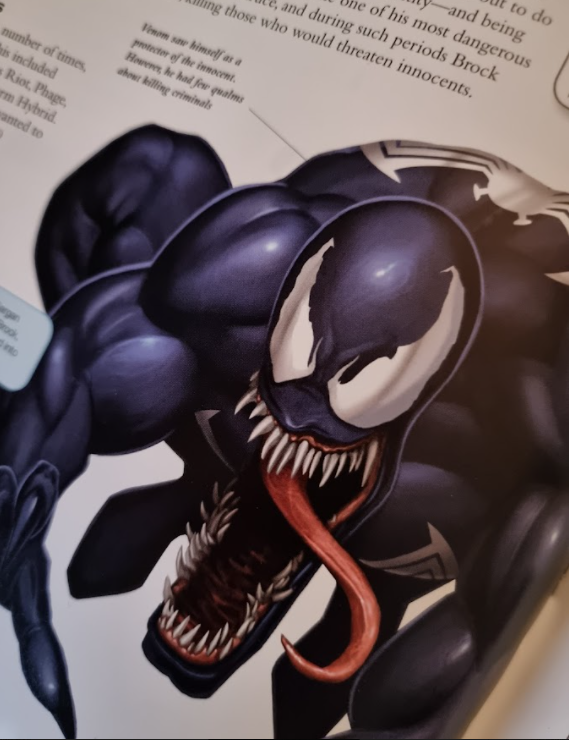 Venom is one of my favorite villains in the comic book world. As a kid, I thought it was so dark, it should belong to DC. Venom from the cartoon and early Spider-Man movies was terrifying to me. The “good kind” of bad guy. So, when the first movie hit theaters back in 2018 I was thrilled. But… Was it good?

Eyes, lungs, pancreas. So many snacks, so little time!

Let’s go back in the past for a second. What is Venom? What is Carnage? Symbiotes, what? It’s confusing. Worry not, Lot. I am here to tell you everything about it. Venom first appeared in The Amazing Spider-Man issue 298 (March 1988). Venom as a new character came from Marvel Comic reader, Randy Schueller. Marvel sent him a letter acknowledging the idea and eventually bought it from him for… 220$. The idea later was turned by Jim Shooter to “new Spider-Man costume”.

After various ideas on the general concept, it was settled that Venom will be an “alien suit” – more specifically a sentient alien being that was vulnerable to high sonic energy. Why was it perfect for our dear Peter Parker? Well, one of the greatest qualities of Spider-Man is his spider sense. Great superpower that caused the development of invulnerability.

Sure, some of the villains like Mysterio were able to “disable” spider-sense through chemicals, but the idea was to completely hijack it. And do that in such a way, that both Spider-Man and Peter Parker would have to deal with the consequences. So, Spidey was the first host.

Outstanding. Now, let’s bite all their heads off, and pile them up in the corner.

But since we’ve already seen Spider-Man 3 where an “alien” substance took over our beloved character, Sony decided to present the story of another host – Eddie Brock. In the comic books we get the backstory of a disgraced journalist, exposed by Spider-Man. So, there is the root cause of the feud. There was a tragic twist as well – Eddie had cancer and was about to end his life, when the symbiote bonded with him and put his sickness in remission.

Sony’s movies gave us a different take on the story, though that post-credit scene in Let there be Carnage may be setting the record straight. Does that mean that 2018 film and its 2021 sequel are bad? No, absolutely not. Sure, I am fan of more “true to the source” stories when it comes to comic books, but this is the thing with Marvel I guess. And that is probably why I am drifting towards the darker world of DC.

But this was my biggest bone with these movies –they were too goofy. The humor was nice and much appreciated, but Venom in my head is more sinister… It was kind of surprising to see that it was turned around. But… Maybe Venom IS a man’s best friend?

The way I see it, we can do whatever we want.

I am having a hard time deciding if new Venom films are my guilty pleasure or not. The guilty part, I mean. First installment was really fun to watch and I think that casting all tough Tom Hardy as a bit of a dorky, clumsy and calm journalist was spot on. He does not suit that role at all – and that’s what makes it great. But it was Venom without Spider-Man. As much as I appreciate the backstory…

That really wasn’t the right backstory. But the ongoing complicated relationship between Sony and Disney/Marvel might be the cause, right? But at least they showcased the powers! Which was really neat and that gave the audience the jist of scary, terrible Venom – shapeshifting, mimicking the appearance of other humanoids (after obtaining a new host), carrying items without adding mass to the “costume” and telepathic abilities.

However, since Spidey was the first original host, every NEXT host received “hero superpower”, which made it impossible to be detected by spider-sense. Which makes sense, really. That is why Spider-Man struggled with a lot of enemies affected by the symbiote. His fighting style is mainly based ON spider-sense. Maybe we will find out more in upcoming stories, though. That is a neat thing to explore!

Whatever you say. But can we get something to eat now? Otherwise, your liver, it’s starting to look really, really good and juicy.

The strongest point of both movies were the interactions between Eddie and Venom, which really makes you believe that… Venom IS a man’s best friend. They way he protects Eddie from all the dangers! Sure, he was just fighting back the bad guys, but still.

My favorite scene from Let there be Carnage is when Venom apologizes for not being able to mend a broken heart. That only proves that despite a lot of differences, he really cares for Eddie. And frankly? He might just be a better friend than many people out there! 😉 What I also liked about this film was the showcasing of the complexity of their relationship.

Eddie felt… Elevated with Venom’s powers. He got him the best stories and paved the path to the top for him. Even though the methods were questionable, there is no denying that a big part of Eddie enjoyed the show. He was a loser. Looser with a good heart and that was something Venom learnt – that violence and eating people is not always the way to go. Let there be Carnage pictured this perfectly – Eddie and Venom bonded, whereas Cletus and Carnage did not share any bond.

The deal is, you will only ever be allowed to touch, harm, hurt, possibly, very possibly, eat very, very bad people, but never, never, ever good people. All right?

Let’s talk a little bit about Carnage – again the comic book backstory was a tad different, but I liked the way it showed it in the film. The one change I am not sure about was… That bond between Ketus and Carnage was actually more profound in the comic books. Having read only a few issues of the source material, I don’t know how to feel about this, but… I think I prefer the Eddie-Venom dynamic.

The biggest mistake Let there be Carnage crew made was… The PG-13 rating. I mean, they literally reduced one of the most deadly Marvel villains to a chained, restrained symbiote. I understand that Marvel is trying to be accessible to all audiences… What I don’t understand is why they decided to make such drastic changes.

Regardless, both films were fun to watch. I like the first part better, and I watch it quite often. Tom Hardy didn’t know the character all that well, but he took the part to make his son – Luis – happy. There was no hesitation to make a movie, where his character will bite people’s heads off 😉

Oh, and that brings me to my FAVORITE trivia ever about Venom – the restaurant scene was shot once with the live lobsters and once with the fake ones.. The lobster that Tom Hardy bites into was actually candy-coated marshmallow filling with chocolate syrup. Also, Hardy “diving” into the lobster tank? Totally improvised.

When I get out of here, and I will….there’s gonna be carnage.

Venom and Let there be Carnage are hard to review, really. I don’t see them as “typical Marvel” – and rightfully so, since they were produced “in association with”. Speaking of, I feel like watching Spiderverse all over again. But to the point, these are not the best movies out there. But they are worth watching, even for the fun of it. The comic book accuracy is pretty low.

Cool thing about Venom and the general symbiote thing is that it’s spreading. You know I collect Funko Pop figures, right? Well, there is an entire series called “venomized”! And they are pretty dope. Well, I hope Santa is listening 😉 My Pop collection is slowly growing with Duke Leto and Paul recently joining the crew.

Final thoughts though – it’s a pleasure. Not guilty, just a regular, sweet, weekend pleasure. I don’t have high hopes when it comes to follow up stories, but maybe if I will expect nothing, I will get everything.

2 thoughts on “Venom is a man’s best friend!”