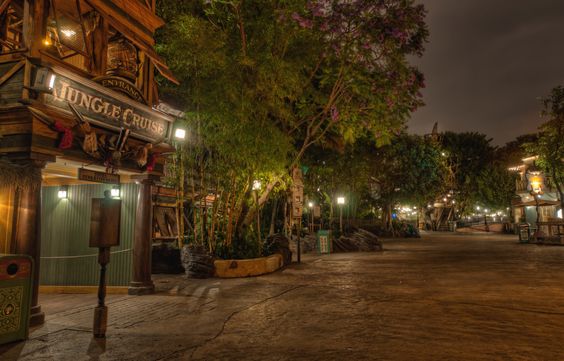 Jungle Cruise is a new film by Disney, one of the postponed creations that I was very excited about. I mean, how often do we get a film that is based on… An actual “Jungle Cruise” ride from Disney Park? Okay, well it happened a few times, but I am sure you didn’t hear about them. Me neither, but hey – now is the time to catch up, no?

Ladies and gentlemen, the moment you’ve all been waiting for. The backside of water!

Generally, Disney adapted movies into fun, thrilling and wonderful attractions or rides, but there were few instances when it was the other way around. Of course, Disney dived into television and films to get funds for theme parks. And the first, flagship TV series produced by the studio was Walt Disney anthology series (over the years with different titles), released in 1954. It was broadcasted weekly for 36 years. Then there was a 2-year hiatus and then again for 25 years.

Disney is the only film company to convert their themed attractions into films: Jungle Cruise being the most recent one, but among its precursors, we can find Tower of terror, Mission to Mars, The Country Bears and… The Pirates of Caribbean: The Curse of the Black Pearl. Oh yes, that last one was based on a Disney Park ride as well.

Many more attractions were “themes” for movies, but let’s be real – these productions were not very successful for broader audience to hear about them. It’s okay though, that’s why I am here!

My name is Dr. Lily Houghton. My brother and I are looking for passage upriver. Legend has it that there is a tree that possesses unparalleled healing power. It will change medicine forever.

Emily Blunt, when first reading the script, was afraid that she would be in the Rock’s shadow; that people would label her as “Dwayne’s girl”. But oh damn, was she the brightest star of this film? I absolutely loved the British energy she transferred into Lily Houghton – the fearless doctor of botany, who wishes to find the tree of life.

A mystical, wonderful and almost too-good-to-be-true tree with petals that could cure every disease. Lily is willing to go above and beyond to find it. All that in good cause – she really wants to help everyone! With no hidden agenda, just because she cares. Doctor Houghton is willing to risk her life in the jungle, but she sees it as a great adventure.

I liked the subtle feminism, which was not overshadowed by Rock’s charisma, charm, dad jokes and ability to save the day. Lily was wearing the pants in this “relationship” – metaphorically and literally!! It was great to see that move from Disney and that was the female power I love to see in the movies.

Hey McGregor, Had a girlfriend once, she was a cross-eyed. Didn’t work out. We could never see eye to eye!

From the beginning we are thrown into the action, witnessing the resourceful young doctor retrieving an important artefact, that will help her reach the destination, in the heart of the jungle. She is accompanied by her brother – the complete opposite of a fearless adventurer. McGregor (played by Jack Whitehall) wanted to be anywhere but the jungle.

On the other side, we meet Frank, the skipper on the dangerous Amazon River. He is smarty, darn charming (holy crap, I cannot believe I fell for that!) and with a secret, mysterious past. He serves as a “tour guide” through the cruises and barely gets by. And you know what? If you think that the puns are corny, think twice. First, they will make you laugh and there is no denying. Second, they are actually taken DIRECTLY from the original ride. It is an extremely important element of the overall experience. And yes, they are so bad they’re good.

I also really liked the “stupid” antagonist. Why stupid, you may ask? You know, this film made me feel like I’m a kid again, watching a jungle adventure on a Sunday noon with my family. As a kid, I though that every bad guy was “stupid”, so not that I am judging the character’s intelligence, but rather am being a kid at heart. Jesse Plemons as Prince Joachim, a German aristocrat who wanted to rule the world, was a great opponent for the dynamic duo.

She was always chasing after some far-fetched idea. There’s no such things as curses.

I had a very different plan for that Friday afternoon but I decided that I need some quality time with myself. My life is a hot mess lately and even though I took a step back at work (less stress, baby!), it’s been hard. Hard to find time to take a breath.

I talked with a friend about what keeps us sane, and for her it’s yoga – she got so positively lost in it… Just like I got lost in the cinema. And buying books (which I was regretting just yesterday), but that is a different story. So, I decided to take myself on a date! There was a small walk before the cinema, ice cream with chocolate sauce, smoothie sneaked into the room and lots of serenity.

I love going to the movies by myself. It is a different kind of experience. Sure, I love watching Marvel with my girls; I miss Movie Club nights out but… But. Having some quality time in yourself is the sweetest and cheapest remedy sometimes.

And the movie was so much fun! Honestly, it was a thrilling adventure, making me laugh and cry within minutes. And what a plot twist! You Lot, I seriously never saw that one coming. I can totally understand why “Jungle Cruise” was Walt Disney’s favorite ride. For me, it was a nostalgic kick to Indiana Jones and The Mummy times.

Even though it mixes up some super-natural elements, that might seem out of place but come on. That actually added the charm to the story. The cursed pirates resembled in a way the crew of Davy Jones (oh, do you remember that music box?!) – his crew was bound to the sea, whereas the conquistadores were bound to the jungle. But much like with Dune in science-fiction, The Pirates of the Caribbean were the precursor of pirate-genre.

And it wasn’t a typical rip-off. After all, there were snakes and bees involved and wow, that CGI was pretty impressive. I think it is a perfect movie for everyone, who needs a break from something. The weather, work, family, friends, stress and drama. It is a movie that will be on my comfort-watching list, because it feels like the highlight from my childhood.

If you’re lucky enough to have one person in this life to care about, then that’s world enough for me…

Full of real-time Easter eggs, Jungle Cruise is a 2-hours of pure fun and joy. With impossible but SOOO GOOOD twists and engaging plot, is something everyone needs. In essence, it is one of the cinema purposes – escapism. But also enjoyment!

Oh, and did I mention the beautiful soundtrack? That orchestral version of Nothing else matters was so on point, and to be honest – the last tune I expected to hear. But that’s all-James Newton Howard. I would never think less of him.

If you are still struggling whether to watch this movie or not – watch it. It will feel like a hug for your mind, something we all could use right now.