She who controls the spice… 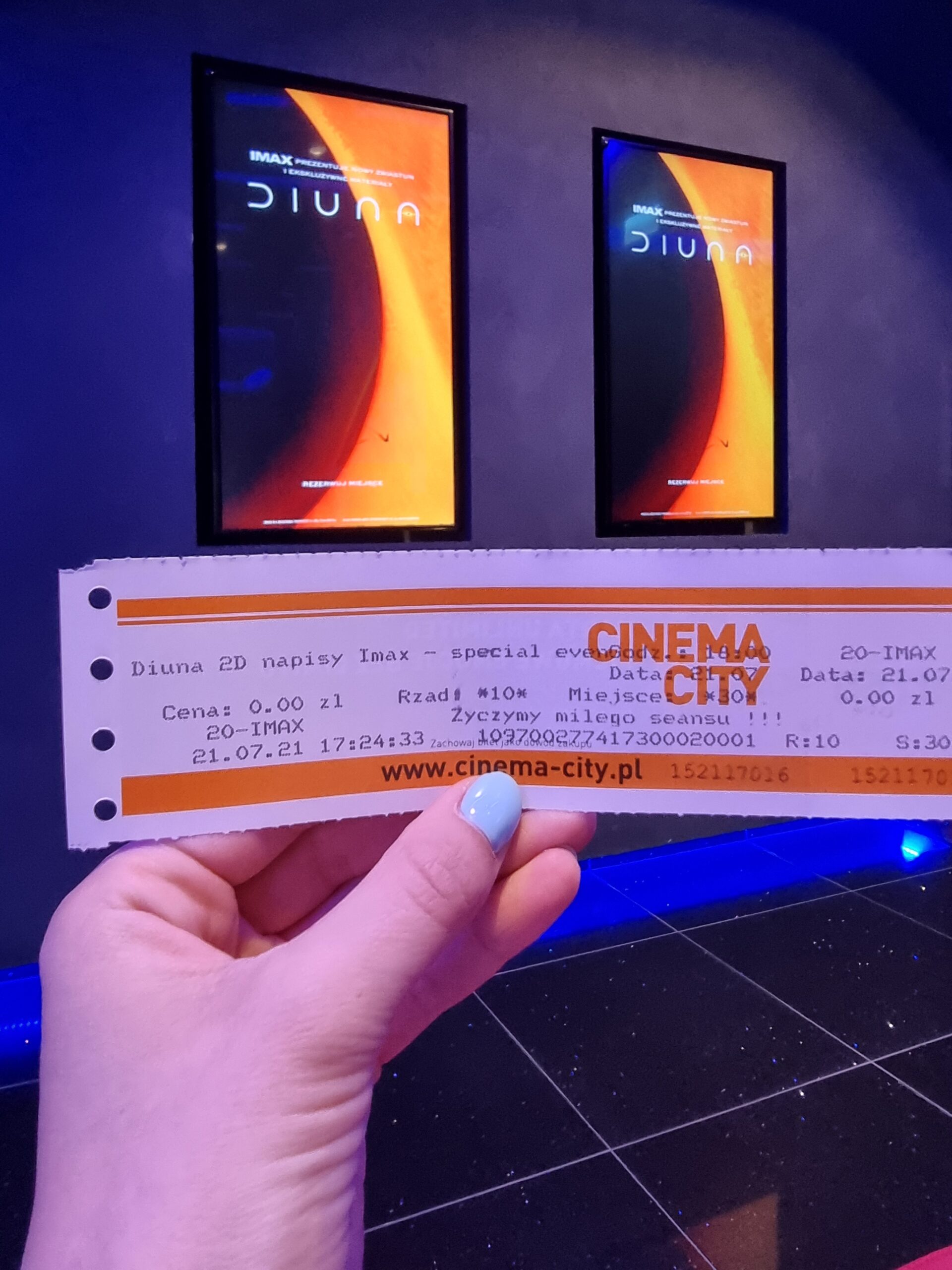 The spice must flow. For the first time in ages, I can really feel the hype on my fingertips. It’s under my skin, it’s in my head, in my heart and most importantly – in my soul. Why is it so different for me? Why wasn’t I so stoked for Marvel films? Maybe not even for Star Wars… Dune is special and so is the Spice-fueled hype for it. Let me tell you why.

The mystery of life isn’t a problem to solve, but a reality to experience.

And so is Dune. It is a whole new reality for all of us to experience. When people ask me what this book series is about, it’s hard for me to answer. It is so complex! So wonderfully complicated. The simplest explanation would be: it’s a story about family. A little more in-depth explanation: it’s a story about two families and their long-lasting feud. But it is also a story about power struggle, politics, toxic leadership, environment and ecology, religion… The spice.

It is also a story about love and feeling “the calling”, it’s a story about existence, civilization and survival. Heritage, legacy and what will come next. Herbert’s sci-fi saga is deemed one of the most important in its genre; I don’t think anyone will argue with that. It influenced pretty much every sci-fi movie ever. Yes, even my beloved Star Wars.

But as usual, let’s start with basics: the first novel was published in 1965 by Frank Herbert. Initially as a two-piece “serial” in “Analog” magazine. It is set in 10,191 AG. (26,392 AD), so far in the future, where life is supposed to be better. And okay now, I have this grand plan to talk to you about all of the books, but let’s focus on the first part. We get to know Paul Atreides, young son of Duke Leto and Lady Jessica. The Atreides accept the call of Padishah Emperor Shaddam IV to take stewardship over planet Arrakis, or Dune.

On Wednesday I got the absolute pleasure to watch an exclusive preview of Dune. First 10 minutes of the film, the spice harvesting scene, cast and crew interview and lastly, the new jaw-dropping trailer. And this was an extraordinary experience, unlike anything else. Which only proves the importance and huge significance of Dune in pop culture.

It was my very first VIP-like show of this sort, but boy, you could’ve felt spice in the air. Initially, I had my ticket for 2nd row but guess what… I managed to be hyped-enough to convince the guy at the counter to give me a better spot. So, I was in the10th row, which is one of my favorites in the IMAX room. Much better view, trust me.  At the entrance, the security asked us to place our phones in plastic bags. Everyone had to do it with them making sure your device is stored safely inside.

Inside the room, there were security guards, at both sides and in the upper balcony. They had night-vision goggles, making sure that no one was recording anything. Well, thank the Maker I am an analog lady, with pen and paper. Fifteen minutes before the show, I was able to make some notes. People were slowly filling up the room, and I sunk into my seat, trying to take in all of it.

The mind commands the body and it obeys. The mind orders itself and meets resistance.

Preview started with the cast & crew expressing their HYPED attitude and how great of an adventure this movie is. It’s a whole new Universe that is getting re-introduced to the audience. Audiences, actually. There are people who remember 1984 Dune by Lynch (terrible book adaptation, decent Lynch movie; even though Lynch himself hates it, due to studio feud) and 2000 miniseries. There is Jodorowsky’s Dune. Some were good, some mediocre, some should never happen. There should be (and there probably is) a lot of pressure on Villeneuve’s film but I feel calm about it.

And then, we got to see the first 10 minutes, which began with Chani’s narrative. 2 seconds in and I know that there is no way this movie will be bad. Spice is strong with this one and with every new frame on the screen the cinnamon scent was even stronger.

Technically, this film was made and is only meant for IMAX. I beg you, lot – support the art and buy the tickets. See it in IMAX as the Maker wants us to. Dennis put his heart, passion and teenage hype to make this movie the best version; the one that needed time and technology to be created. It will be an artistic, aesthetic and visual masterpiece, with to-the-page accuracy with the book.

Arrakis teaches the attitude of the knife – chopping off what’s incomplete and saying: ‘Now, it’s complete because it’s ended here.’

That first 10 minutes felt like 3 and having the scene end abruptly was heart-shattering. What 10 minutes? Are you for real?! The cinema was dead-silent, awaiting more. We got to see Dennis’ favorite scene – spice harvesting felt like taken from the book; simply turned into a graphical journey. I must say that the casting was perfect – even though I was skeptical about Rebecca Ferguson, I think she will be great as Lady Jessica.

But the biggest impression, and I think my favorite part of the 10 minutes preview and then the new trailer, is the father-son relationship between Paul and Leto. The looks, the mentorship and conversation at Caladan… “A great man doesn’t seek to lead. He is called to it”. Look, my feelings for Oscar Isaac (THAT DAMN SILVER FOX) aside, but he will be the best Duke Leto, he is the only one and I will not even argue about that. This isn’t a debate team.

Everyone is really damn well casted – Timothée Chalamet with his confusing appearance, but such a great emotional-fueled, spice-scented acting will make great Paul. Zendaya as Chani, Javier Bardem as Stilgar, Josh Brolin will play Gurney (absolutely wonderful choice), Jason Momoa will bring to life Duncan Idaho… And the “evil” side with Stellan Skarsgård as the Baron, David Dastmalchian playing Piter and Dave Bautista as the Beast.

The concept of progress acts as a protective mechanism to shield us from the terrors of the future.

Another argument that speaks volume of that film are the childhood dreams of… Villeneuve and Zimmer. Dennis, when he was a young boy (12 at that time), he made a series of storyboards with young Paul Atreides. Years later, he is now behind the biggest wheel of science-fiction foundation. As for Hans Zimmer, yet another youthful dream that made him resign from working with Chris Nolan on TENET.

And as for the music, Zimmer decided to go one step beyond – he created a whole new instrument for that film. On that preview, he was so excited to explain that in every sci-fi movie he heard a certain kind of music, so for Dune he decided to let the spice flow and come up with something… Different.

Just like this story is. One of my favorite themes is the toxicity of charismatic leadership, which is something I will explore in upcoming posts. But for now, the one thing I want you to focus on is the hype. Hype, that brings people across the world and time zones together, in the most unexpected ways. Marvel and DC, Star Wars and Star Trek have gigantic fandoms all over. But with Dune we are witnessing the rise of a new era; wonderful community of spice lovers is born.

Do you wrestle with dreams?

For me, it is a wonderful opportunity to show you what an extraordinary this journey on Arrakis is. The books are demanding, tricky and will keep you on the edge, but they are worth it. It will make you wonder, if the sci-fi novels are truly just fiction or maybe a vision of the future?  And if the latter, is this the kind of world you would like to live in?

Dune is like pop cultural kaleidoscope, the image shifts and changes with every subtle move; the views, impressions are never the same. The 2021 movie adaptation will change cinematic history forever; it will shape the sci-fi genre much like Nolan’s The Dark Knight trilogy changes superhero movies.

It’s something long-overdue, but GOOD, because the creators finally have the tools to make the vision alive. We (the audience) are mature enough to see the multidimensional beauty of Frank Herbert’s most critically acclaimed work.

P.S.
The wonderful community I mentioned? Never felt more welcomed in any fandom, ever. It was a split-second decision to feature me on Dune Podcast. It took some logistics, planning and good vibes to make that episode happen. It is now available on Apple Podcast, with a YouTube video coming tomorrow. Thank you, guys – your love and passion are something that lifts my heart! Good things are coming…

„I must not fear.

Fear is the mind-killer.

Fear is the little-death that brings total obliteration.

I will face my fear.

I will permit it to pass over me and through me.

And when it has gone past, I will turn the inner eye to see its path.

Where the fear has gone there will be nothing. Only I will remain.”

Litany Against Fear by Frank Herbert

7 thoughts on “She who controls the spice…”