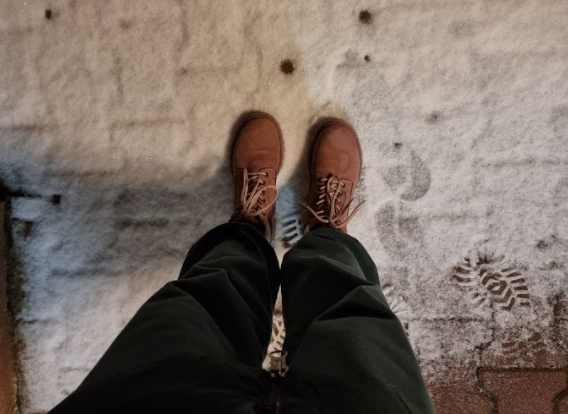 Winter is here, even though we are still a few days away from the astronomical winter as a season. The snow is still lingering on the sidewalks and it’s very slippery. But that is the beauty of it! And I wouldn’t change it for the heat of the summer. Why would I?

I was supposed to trim the tree with you today, but I am a little short on time, to be honest. Wait, what? You might think. My tree is already here, it’s already trimmed and there is nothing left to do. But there is a story to every ornament that I want you to hear.

So, as I brew my winter tea, let’s take a look at movies we watched during this snowy, white winter. I don’t know about you lot, but I can’t catch a break lately and now more than ever, I watch movies for the escape factor. And girl, I am escaping alright.

SEPTEMBER – Movies that… are stuck on „to watch” list

Come on. Don’t even try to deny bro – we all have that kind of list. Just check what’s on your list on Netflix and then be a B about it. And there is no shame about it, I mean – my list is full. I was trying to clean it up this winter. But guess what? I fell down the stairs and it hurts like hell. So I went back to my lovely Star Wars.

But September was pretty good for me – I finally watched the ones that were sitting on my list for the longest time. And I was pleasantly surprised with few of them. As for the premieres – Shang Chi was GREAT, but Snake eyes were probably the biggest disappointment of 2021.

Here is what the gang watched in September:

SURPRISE OF THE MONTH: Beetlejuice (1988) – I was sure I watched this movie as a kid and for some reason I classified it as super-scary. But it was really cool! MK as the title character was brilliant, though I believe he got mixed reviews.

“MEMORY LANE” OF THE MONTH: The Addams family (1991) – Ahh what a sweet memory it was! It was so fun to revisit this movie. Say whatever you want, but that is a classic. Gomez and Morticia are border-line steamy and whew! What a performance.

HIGHEST SCORE OF THE MONTH: Crouching Tiger, Hidden Dragon (2000) – as if there was anything else!!!! Why oh why it took me so much time to watch it? And to think I just wanted to “cross it” from the list. I was moved by the end, and did not see that kind of ending coming. It was beautiful and authentic.

BEST MOVIE OF THE MONTH: The Iron Giant (1999) – could be the second most heartbreaking animation I’ve ever seen (right after The Lion King of course). Okay, there probably were more movies that made me cry, but I like to think that this one is on top of the list. Wonderful lesson for every kid and adult.

This was a challenge, I am not gonna lie. I chose pretty cool movies from the 90s, but there is one extremely distinctive thing about them – they are long as heck. And some scenes are so completely unnecessary, I can’t. But I got through with it, for which I am very proud of myself.

October was pretty kind to me with premieres – saw plenty on the big screen! Though there was only one winner when it comes to that – Dune. Hands down, the best movie of 2021. As for the TV shows, I finished Scenes from a marriage and wow. It was a lot to process!

Here is everything we watched in October:

SURPRISE OF THE MONTH: The Three Musketeers (1993) – I’ve seen a lot of adaptations of this story, but I gotta say – this one is the most entertaining. There is something about “cloak and dagger” stories, right? And how surprised I was once I went over the casting list! Quite a few names, no?

DISAPPOINTMENT OF THE MONTH: In the heights (2021) – well… I kinda expected more. And what we got was a story about dreams, about a block that disappears when people stop chasing their dreams… They build it up for the most disappointing finale of the winter – giving up on your dream. Wow.

HIGHEST SCORE OF THE MONTH: Dune (2021) – Is anyone surprised? I am trying not to be biased but HOLY SHIT!!!! Amazing, truly amazing vision. But I have already said everything here.

BEST MOVIES OF THE MONTH: Indecent proposal (1993) – is there anyone who was not affected by that movie? Like… Can you really pass by it, without thinking about it? The biggest moral dilemma, old as time. What would YOU do? Because I don’t even wanna think about it.

There is only one, final part of this summary left! Can you believe how fast this year has gone by? Sheeh. But yes, in the first week of January (still winter, but a new beginning) I will wrap up the 2021 Movie Challenge (JOURNAL) and introduce the 2022 version of this thing.

Remember, that you can join TPC Movie Challenge (Journal) at any point – just go here and download the journal file, make sure you follow the rules (I accept bending them, though) and send it to me as soon as you finish each month.