Black is the warmest color 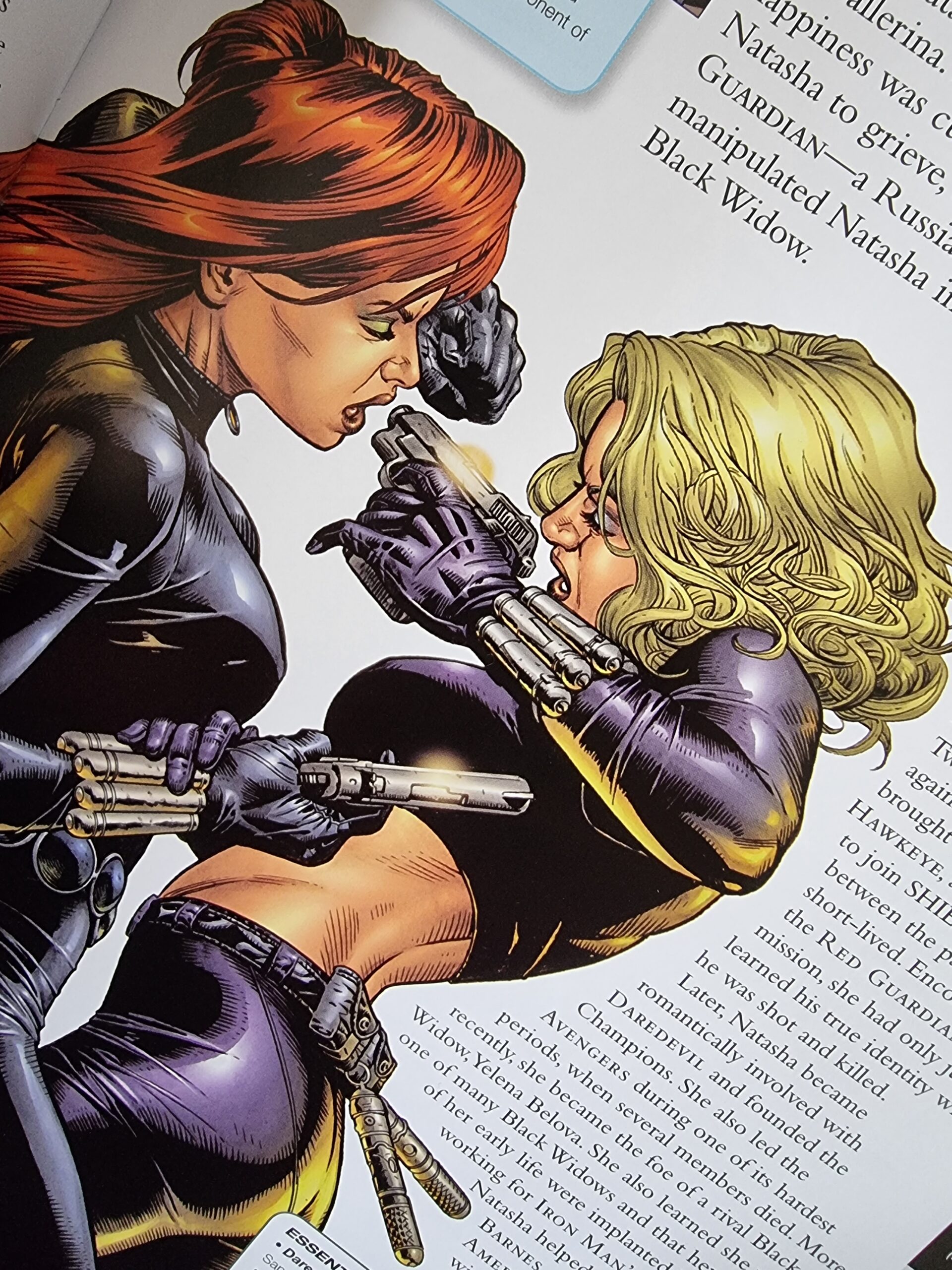 Black Widow debuted in the comic book world in April 1964. Created by Stan Lee, Don Rico and Don Heck. Issue was called Tales of Suspense (Vol 1 52). It was also the first encounter between Black Widow (Madame Natasha) and Tony Stark. The Crimson Dynamo Strikes Again! Not in my collection yet, but HER story is worth being told. And listened to it. I am still on the fence with how Black Widow’s life was presented in the MCU. But maybe that is the sign of our times?

My name is… Madame Natasha… but you… can call me The Black Widow!

Her first on-screen appearance dates back to… 1966! Oh yes. Thought I would say 2010? Ah Lot. You should know me better now. Marvel is not just MCU, thank the Gods! Black Widow (voiced by Margaret Griffin) appeared in an animated television series called The Marvel Super Heroes. It was actually the first TV series based on Marvel comic books. But the most notable one, the most recognized role is the one from Marvel Cinematic Universe. Scarlett Johansson brought to life this iconic character and gave her 10+ amazing years.

And I agree – she was the best Black Widow. And yes, I’ve seen different versions, heck – I even played video games where she was featured. Last Thursday I got to see the opening night of her first (and only) solo movie… Yes, the one that was 8 years overdue. And they chose a story the studio chose – about 5 years too late.

You have no idea how angry I am! This talk about women stepping up, taking a lead and the world by storm? Making a difference? Jeez, that ridiculously exaggerated all-female scene in Endgame could have caused more damage than actual good. And I am here to say it – or rather repeat it – out loud: Black Widow deserved better.

She truly did. It’s not like I wanted Hawkeye to take the fall, duck no. They were my favorite duo in the franchise. I was dying to see what on Earth happened in Budapest. And what we got was a short explanation of something that was teased for years. Something that people would never forgive, if the studio would’ve just cut it off. And what a great retrospective movie would that be! Black Widow was one of the most tragic characters both in the comic books and the MCU.

Watching her solo film made me realize that Natasha was so lonely. Alone. Even though she found a family – the Avengers – she was alone. Lonely. Did she ever really trust anyone? Was there anyone she could call up in the middle of the night to have a conversation about shooting stars, to ask existential questions or just simply be quiet with?

Black Widow the movie struck me with a cursed realization – all she ever wanted was erased from her mind, replaced with stone-cold bitterness, distrust and “all men for themselves”. Can we blame her? That was the psychological conditioning she was under while training in the Red Room. And that is something we didn’t get to see on the big screen – even though we got a well-explored story of Iron Man, Captain America, Thor and even Hawkeye (with his secret family and some upcoming storylines in the show). I hope you understand now why this makes me so angry.

Nothing serious, just feeling a little mortal these days.

But don’t get me wrong you Lot – I enjoyed the MCU version of Black Widow. She was funny, smart and one of the best spies in that Universe. She was working in the shadows, in the background and always had an agenda. Many held it against her – like Steve Rogers in The Winter Soldier. Ultimately, Natasha grew and learnt to be a great, essential team player. Her wit, intelligence and experience were vital.

At the moment of her sacrifice, she felt complete – her life finally had a meaning. She was using her Black Widow deadly skills to do some good in the world. She was the one pushing for a “reset button” when the opportunity came. But it all feels… Too fragile to be true. But then again, I am a bigger fan of the comic book universe than MCU.

Russo brothers said once that if they wanted a literal interpretation, they would just read the comics. And that it is fun to take elements from the source and use them in a different way. And I somewhat agree with this approach but… No fan wanted an exact, mirrored experience. But if we are taking some elements, I would stay faithful to the core. Then I would mix it up.

Luckily I am not the only one and the Internet is full of people who didn’t enjoy certain MCU stories, like the origins of Ultron, ridiculously bad Mandarin and the major change in Civil War. But today I want to talk about Black Widow and why we got so little of her over this decade.

I am glad that MCU decided to change the major storyline in Black Widow – Natasha and Yelena fighting against each other. This is how you show female empowerment that does not feel forced: by presenting two strong women being there for each other no matter the history. Natasha was older and more experienced, but Yelena had a fresher approach and sadly, worse training. Worse in terms of the actual changes in her brain. Seeing both of them come together as sisters was something the public needed…. 5 years ago, right after the Civil War movie.

In the comic books, two Black Widows were enemies and that is when Natasha found out that she is ONE OF many Black Widows created in the Red Room. She was also married to Alexei Shostakov, however the KBG faked his death and left Natasha in grief. Shostakov was trained in secret and became the Red Guardian, while Natasha was turned into a top-spy. What I wanted to see in an alternative MCU was Romanoff’s relationship with Daredevil! Gosh, that would be a dream story line to explore.

As for Yelena Belova, the post- credit scene gives two opportunities for the Hawkeye show – the good and the bad. The good one will result in Belova not fulfilling her mission, but I am more keen on the bad one. And that would actually make more sense, since we will be introduced to Kate Bishop. What I can tell you right now is that I absolutely LOVED Florence Pugh and she is slowly becoming one of my favorite actresses.

As for other differences, minor or not, I liked the Red Guardian we got from MCU. And kudos for not letting him steal the show, even though David Harbour put all of his charm into the character. The drive that Shostakov had to become KBG’s shiny and only superhero was visible, even when the sisters rescued him from the prison. In the comic books, he “died” twice – once to become the Red Guardian and second time seemingly to save Natasha and Captain America (yup, in the comic book world they met, no ice as an obstacle whatsoever). But as it is in the comic books, he turned up alive again. This time on a mission to bring Natasha to justice for the treason of her country.

The unacceptable change – yet one that I understand for the sake of the integrity of MCU (Loki called Natasha “Dreykov’s daughter” after all) – is the Taskmaster. In the comic books, Taskmaster was Tony Masters, who had the ability to copy other people’s movements. Regardless of the complexity, after watching them just once. He even trained the hated John Walker (set up in the MCU to be the US Agent), for his new position of Captain America.

Taskmaster discovered that there is no fun in committing crimes and it is better to train the bad guys. He even set up an academy for that. I like his transformation in the comic books as well – there were some gaps in his memory but he remembered that once he was an agent of SHIELD. Ultimately, after a rough way up, he joined SHIELD’s secret Avengers team. In the film however… Well, it was dramatically different. And kind of predictable, especially mid-film, when pieces fall in together. The one thing that resembled the comic book storyline is the “transformation” and being exposed to the antidote, instead of being accidentaily ingested with a Nazi serum.

My past is my own.

I said that this is a tragic character, right? I hope you can see it now, both in the comic book world and in MCU. But the key difference is that MCU left us hanging and wanting more. I am sorry, I love Iron Man and Captain America and I LOVE THE FACT that she appeared in their films as well, but for God’s sake! Sure, everybody wondered what she was up to after events in Civil War, but we also wanted something about Budapest, something that would actually let us understand how Barton inspired her to join SHIELD. Was it only the life debt or did she really realize that this could be her new way of life?

Guess we will never know now. There is no way in the world MCU will ever fill these plot holes, because they will never recast their iconic characters. I expect some references in the Hawkeye show (also, I am super excited for it, like SOO EXCITED), but I think it will be a farewell to this character as well.

The ultimate goodbye to Johansson’s Black Widow felt bitter-sweet to me. It truly was a great story – much needed one, but I wanted more. And even though I will always re-watch the MCU with love and evergreen sentiment, the Black Widow story will be thorn in my heart. I wish that the next phase of Marvel Cinematic Universe will put Yelena Belova on the right track, where she belongs – upfront, taking the lead.

P.S.
I am planning to do MCU run-down, the way I did it with Oscar movies and Star Trek. But that will come after I move and will have more time. I think that recaps like that are pretty cool so… Brace yourself for Marvel, DC and Star Wars coming!

One thought on “Black is the warmest color”