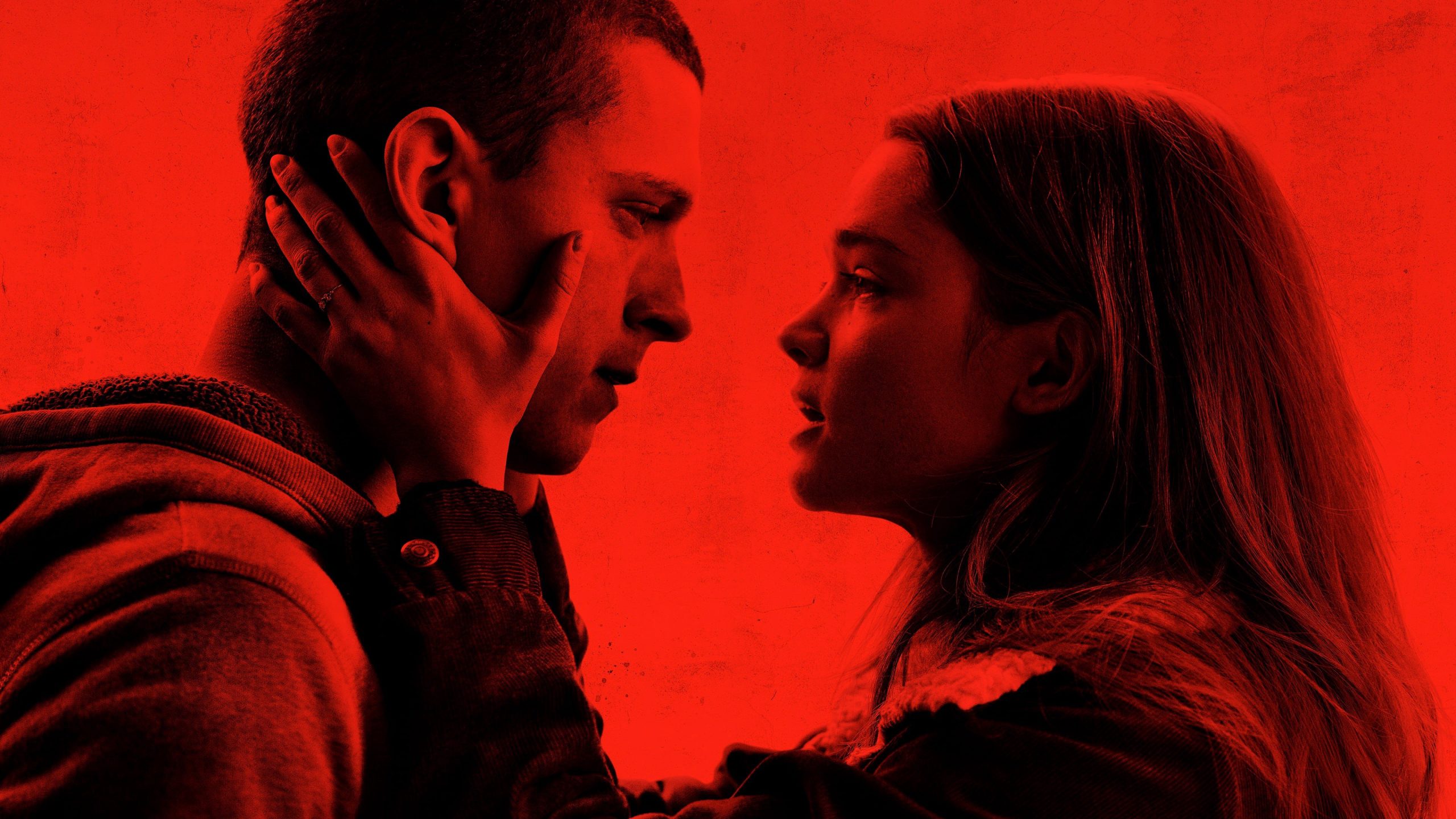 Cherry had its theatrical premiere on February 26th, but sadly cinemas in Poland (only the local ones) did not pursue the license – and good, because on March 12th it hit Apple TV. I waited for this film – another very mature role from Tom Holland and something different from the superhero story from Russo brothers. So, what could go wrong?

I’m 23 years old and I still don’t understand what it is that people do.

Hey, Cherry – I am 27 and I don’t understand that either. Is there anyone in the world, who figured it out? Don’t think so. But hey, why don’t we start with something less philosophical – the book this film was based on. A life story from Nico Walker – vulgar, brutal and great example of autofiction type of novel. I struggled with this read, as it reminded me a lot of “A clockwork orange”. It deals with another life dilemma: how to deal with the evil we encounter?

Nico Walker was a soldier in Iraq and when he came home, addiction struggles began. Dope is money-draining, so he started robbing banks – and that is another aspect that was really interesting. Bank robberies were purely personal.

In Cherry the novel, the nameless protagonist (and at the same time, antagonist, unless… we cut a deal that ADDICTION is in fact the greatest antagonist here) is a 25-year-old boy from Cleveland, Ohio. He and Emily, his girlfriend, both struggle with heroin use. Plot begins somewhere in the teen years of our hero, college experience, being a drop-out and enlisting to the army, much to Emily’s dismay. His tour in Iraq comes and as expected – it ruins him, destroys the innocence. Or… Does Cherry lose it? He comes back, meets another woman, suffers from PTSD, gets back together with Emily, despite his addiction…

And things get tricky.

Sometimes I wonder if life was wasted on me.

The Russo brothers decided to focus more on young love – love, that does not let go. Love, that will make your head spin and give you the biggest high. Something so great, so undefeated – that nothing can compete. I don’t think that Cherry the movie script was bad. The storytelling bothers me a bit – source material was, is strong enough to make a good film. Some of the features Russos used, like the “telephone voice” over Ciara Bravo’s dialogue, was a great trick. But Tom Holland’s narrative during the scenes – that is a no. It made this film look less serious, less dramatic.

And it is a dramatic film, absolutely heartbreaking. I kept on wondering – what would happen, if Emily decided to stay, instead of going to Montreal. Would Cherry still list for the army? Would they fall for addiction nevertheless? That is all hypothetical, but things happen for a reason. And maybe this would’ve happened anyway, even if Emily would stay. After all – they chose addiction as a way of dealing with PTSD and difficulties of maintaining a relationship.

Cherry was advertised as “modern odyssey” but there was no lesson to learn, and that’s what bothers me most. Sure, it shows how awful drug addiction is – in every aspect, on every level. It forced Cherry to rob banks and even though he did not want to hurt people, he did. Not physically, but mentally.

See, the thing about robbing banks is that you’re mostly robbing women, so the last thing you wanna be is rude.

It was nothing personal against the bank employees, but it was personal to Cherry and his “crew” – heroin addiction (or any other addiction, for that matter) is money-drainer. It was personal to him, to make sure that he has his score and that there is a score for Emily, who was a teacher and needed it every day at 5pm sharp. Robbing banks was a way, the easiest way (go figures…) to get money and watching how easily it went… Cherry felt secure. Sure, this caused stress and anxiety, but with each robbery it was easier.

Still, something in the structure of the film gave me an overall feeling of hunger. I expected more, more from the Russo brothers, who collected experiences and tricks from different films, instead of real life. Bear with me – the opera, slow motion, sounds magnified and stylized, the color-blind playfulness… Weird mix, that distracted the viewer from what actually was going on.

And sequences with bank robberies just add to the weirdness – Tom Holland’s character just waltzes in to the bank, waves his gun and just like that, he gets the money. No mask, very obvious disguise… Practically rubbing it in our faces, like it was truly that easy. Nothing about addiction and what comes with it, is easy.

Sometimes I feel like I’ve already seen everything that’s going to happen. And it’s a nightmare.

Posttraumatic stress disorder is an absolute nightmare. I don’t even want to imagine how awful it must feel, but… If you look at Cherry and his way of dealing with it – through drugs – one might begin to have an idea. It must be terrible. PTSD triggered by images of war, violence, loud noises – you name it. Cherry showed extensive military regiment – recruitment, medical exam (which only proved that the Russos wanted to over-achieve) and duty itself.

Military sequence was really rough on my soul. This part felt real and genuine and much closer to the truth, than the rest of the film. It showed the army as a schematic, archaic and fossil-like institution, turning men into killing machines. And a man like Cherry – empathetic and broken-hearted, is the hardest to crack. But once he does… There is no going back. And when I realized that, it really hit me.

Again, not sure if multiple explosions and “typical war part” should be the key to presenting this story. There is no denial that it was absolutely crucial, but I am wondering – what if the army and war were just a background, not a main event? Oh jeez, I know what it reminded me of – Full Metal Jacket, not in a good way.

I like how the power of love was presented – and how scary it is. When two completely different people fall for each other, it’s interesting. Cherry was invested at 189%, and Emily… She loved him, of course. But beginnings were harder for her. Her childhood struggle, the painful past held her back. And this could’ve been another reason why everything fell down. Ciara Bravo gave a wonderful performance of someone, who was not equipped with the capability of loving this much. Ultimately, she paid the highest price – she willingly gave in, she decided to become a junkie.

I am amazed by how the Russos decided to show us “true love” – at first, we see Emily kind of “glowing” in Cherry’s eyes, all focus on her. The rest of the world kind of faded in oblivion, and that is how true love feels, is it not? Still – not sure, if this trick was needed in this film.

Bravo’s chemistry with Tom Holland in that tiny college dorm room was hitting the roof, but it was there, when it all started – the intimacy, the big decisions, the fight and making up. You Lot know my feelings about Tom and I won’t say that he was a bad actor in Cherry. His acting was mature and convincing even though… There is hardly a believable moment in that film. Yet, he pulled off the looks, the moods and expressions. And from what I heard – it cost him a lot. I am not sure, how much influence he had on the character, but probably a lot – and yet, he decided to deliver not a typical addict; he gave us unbelievably stupid and destructive addict. Which was good, because it proved how desperate addiction is.

I have this noise in my head…why can’t it stop?

The reason the movie feels chaotic, even though there is a chapter-structure, is because Russos kept using different lenses and techniques – internal journey, war documentary, journal. It’s confusing, and if one is really invested in the plot, those kinds of tricks are really distracting. For me, the story was powerful enough, to be told in the simplest way possible.

Nico Walker asked if he would watch the film and said “probably no”, as he was not much involved with the making. In one of the interviews, he said: “It’s not like you own a story. It’s everyone’s story. They can tell it their own way.” And the Russos did. Cherry felt for me like trying to prove two things – that Holland is more than a kid in spandex, running around Queens (mission accomplished) and that the Russo brothers can deliver dark and serious films (mission failed).

Cherry is worth watching for the young actors performance and the main plot, but I wouldn’t call it a must. It’s refreshing to see familiar faces in a new setting, that’s for sure. Small piece of advice? Don’t watch it when you feel low.

3 thoughts on “Cherry, the innocence lost”