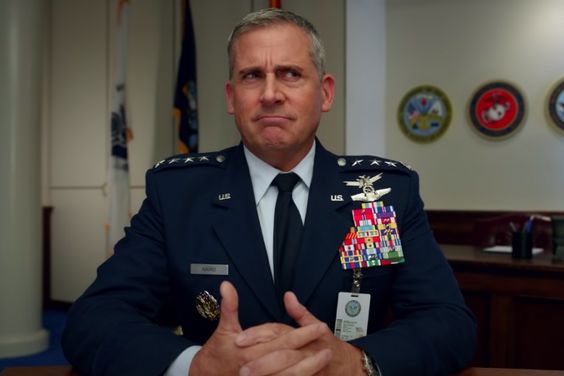 The goal of the new branch is “to defend satellites from attack” and “perform other space related tasks.” Or something. This is the story of the men and women who have to figure it out! In May, Netflix released the first season of Space Force – new comedy series that made space “hilarious again”. But besides being very funny, it also shows how true leaders lead – oh yes, you got that right. There is a leadership message hidden in this gem.

Boots on the moon in 2024. Actually he said boobs on the moon, but we believe that to be a typo.

You lot know that I am a die-hard The Office fan, right? Well, seasons 1-7 to be honest, but hey – still a true fan. As soon as Netflix announced Space Force, not for a single second I thought that this COULD BE LIKE THE OFFICE! Sure: it is a workplace comedy; Steve Carell is involved (as unconventional boss) and there are plenty of jokes and humorous vibes. But before you start watching, you should separate those two shows with a thick, red line.

They are two. Different. Things. Comparing one to the other is simply wrong and should not even be encouraged. LOL! I’m sorry, that “word” is not professional at all, but this is the only acceptable reaction, whenever I read that “The Office was better”. Well, yes and no.

Space Force is focused on a group of people tasked with establishing the sixth branch of the US Armed Forces – the United States Space Force. Steve Carell’s character, Mark Naird, is the first general and he leads the efforts to get „boots on the moon” by 2024. What could go wrong?!

I have to start with all them snaaaaaaaaaaaaaps! BURNS! Wow, that is a real gold mine of all the good bits, comebacks and “ohmygodhedidnot” lines. And Steve Carell is the king! I like how he adds (ADDS, not copies) Michael Scott’s vibe in Space Force – at first glance he is not ready to lead. He seems to be in his own orbit, dealing with family issues – wife in prison, teenage daughter and entire task force to handle. And yet, he keeps the good spirit!

Let’s talk about this for a moment: how important it is to leave your personal life outside the workplace. Damn, this is one of the hardest things in life. I’m not sure I am doing that 100% of the time, but… I sure as hell try to don’t let it impact my work or quality of it. Since I got promoted and now I am in a position to review other people’s work, I swore that I will not let my bad mood “blow” on them. That wouldn’t be fair.

And Mark is just as human as we all – struggling to keep it strictly professional, with unbelievable pressure on his shoulders. Wit and Kokomo are his coping instruments and we should all have something like that in our lives 😉

I don’t know if that is a noun, a verb, or an adjective describing my outfit.

Chemistry between Carell and John Malkovich (Dr Adrian Mallory) is truly special – from partners in crime to nemesis within a few seconds, but with such adorable charm! Mallory was keeping Naird in check (or at least he tried to) but science was always his biggest priority. He brings a delightful gravitas to the silly antics around the American government’s efforts to go back on the moon.

I don’t know if you guys are aware, but Adrian’s character was written “for” Malkovich! Co-creator of the show, Greg Daniels, said in one of the interviews: “Netflix announced the show before we had a script, which was a little bit nerve-racking. But the thing about it was that John Malkovich’s agent called and said, ‘Hey, Malkovich saw the announcement, and he would love to be a part of it!’ ”.

Even John himself thought it was a funny idea: “I was doing a play in London, when the teaser came out, I saw that Steve Carell was attached, and I’ve watched The Office with my daughter and we thought that it has super funny things in it, and just thought it sounded like a very funny idea with the really ideal personnel attached.”

And their collaboration on screen worked a treat! I can’t wait to see more of their heart vs. brain rivalry.

But Space Force is full of tiny gems that shine so bright. Sure, this show is all about Carell and Malkovich, however it also has a strong supporting line. Ben Schwartz as F. Tony Scarapiducci cracked me every single time. There is something about Ben’s face that you just want to punch him, right? He is the PR person dedicated to the Space Force and it’s everything you can imagine when you hear “PR nightmare”. Smug, sassy, dumb at times but also “know it all” – a character that you can’t hate even though is very annoying – therefore should be protected at all costs.

It was sweet to watch how a beautiful friendship blossoms between Captain Angela Ali (Tawny Newsome) and Dr. Chan Kaifang (Jimmy O. Yang) – strong, fierce, independent soldier and nerdy scientist. I am wondering what’s in store for them – now that she is up in space” and he stayed on Earth, making sure that she doesn’t feel alone.

I am wondering what will happen in second season – plot wise. It was booked by Netflix quite soon after season finale, but now with Covid… I am thinking late 2021. Which sucks!

If we don’t get this right, it’ll be the most cataclysmic failure in the short history of Space Force.

All jokes aside, it is a good series to watch before work. Wait, one more joke – monkey in space absolutely killed me, I don’t remember laughing so much! But yes, all goofiness aside, they touch on some serious issues, like the father-daughter relationship and its great importance, the arms-race in space between the US and China. Obviously, there are critics (frankly, this profession should be terminated…) who think that this storyline was bad propaganda. So, “professional critics” have widely attacked it. It’s been called “the year’s biggest TV disappointment” and “astonishingly bad.” Viewers – whose opinion matters the most, to be honest – have been much kinder, giving the show a 77% audience score on Rotten Tomatoes.

And guess what? This show has fans in China – well, maybe “fans” is a stretch, but people find it funny and are not offended. This subject is as deep as the ocean, and if we want to dive in, there is plenty of offensive stuff in the cinematic industry. Which, now that I think about it, could be a great idea for a post? Maybe one day.

I think I know where all the bad reviews come from and that is the biggest problem with you critics – COMPARISON. So what it was created by people behind The Office and formula is somewhat similar, because it’s about a workplace? Still, it is a drastically different show. With strong points and weak angles but still, a very “its own” show. Sometimes it felt too much for me but I absolutely enjoyed it.  For me, the “worst” character was Naird’s daughter – Erin.

She behaved like a spoiled child, entitled to attention but in the end all she wanted was a father who understands her teenage struggles. Being new in town, with no friends and mother in prison – this could hit hard a fragile mind. The fact that I didn’t like the character means that Diana Silvers did a good job portraying it.

Plus, there are some things that made this show golden: Netflix trademarked the name „Space Force.” The Trump administration, which created an actual US Space Force, tried to copyright the name and found it couldn’t because Netflix had done so first. BURN, MIC DROP SNAAAAAAAAAAAAAAAAP!!!

Cheap generals are like cheap enchiladas – you end up paying for it on the back end.

My absolutely favorite thing about Space Force is the leadership lesson we get from general Mark Naird. You might think that he is yet another chaotic boss, full of idealism and unrealistic / impossible ideas but somehow he… Manages. To steal the show, to make it work and to look good while doing it. There is a method in his madness and as long as it works – this is the kind of leader I would follow.

Few days back, I participated in training at work about Transformative Leadership, where we had a discussion whether leaders are born or built. I believe I already asked you what kind of leader you would follow: charismatic one or someone who is a textbook chief. There are some things that are beyond us and can’t be taught.

Do yourself a favor lot and give Space Force a watch. 10 episodes and I guarantee that your endorphins will boost to the roof. If you don’t approach it with “oh look it will be just like The Office” attitude, you will enjoy it very much. Watch it for absolutely hilarious Carell, down to Earth but sassy Malkovich and plot that keeps on surprising you.

If you feel like something a bit more serious but about space, how about a film then? I am wondering about making „Space week” celebration here at Twin Peaks Cafe. In the meantime, read my Ad Astra review (it’s over a year old now, omg!)

4 thoughts on “Other space related tasks”